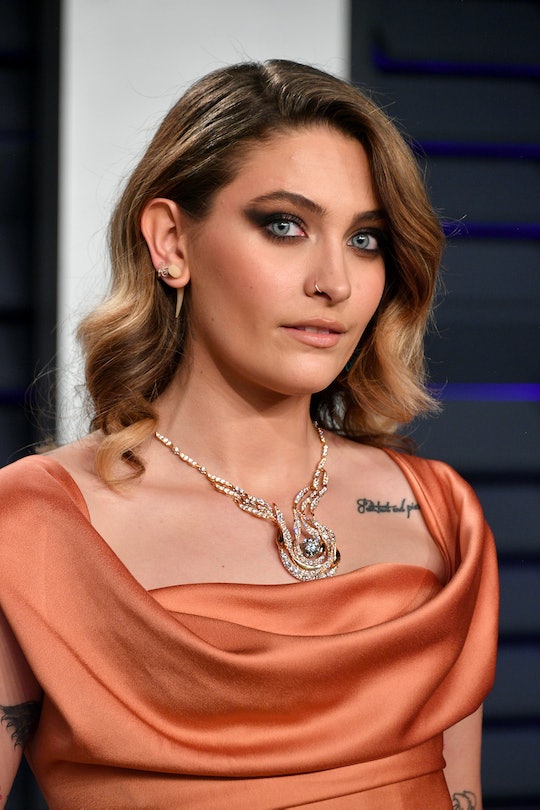 Paris Jackson Doesn't Have A Lot To Say About 'Leaving Neverland'

When HBO released the two-part documentary Leaving Neverland, many viewers wondered what the Jackson family had to say about it. The documentary recounts the stories of two men who allege that Michael Jackson sexually abused them as children and it has sparked discussions all over. While the Jackson family estate has released an official statement about the documentary, Paris Jackson’s reaction to Leaving Neverland says something a little different.

Michael’s daughter spoke at his memorial service after his 2009 death and struggled with the loss for years after, but as of late, she has been able to build a modeling and acting career and seemingly move on from the controversy that surrounded her family before her father’s unexpected death. Following the documentary's initial Sundance premiere in January, the Jackson family estate released a statement that denied the validity of the documentary and said that they should have been reached out to for a comment before the film aired.

"I think we can all agree that the false allegations being made in your 'documentary' are 'significant allegations,'" the statement said. "It is hard to imagine more significant accusations that can possibly be made against anyone."

Jackson’s estate has also filed a lawsuit for up to $100 million in damages from HBO. Paris, on the other hand, has remained mostly silent about the film.

In fact, Paris hasn't even released an official statement, which she pointed out in a recent tweet. When a Gay Star News article claimed that Paris had defended her father against the new allegations, she tweeted, "I actually haven't made any statements yet, especially regarding how it affects my work life."

In another tweet, however, after she told her followers, "Y'all take my life more seriously than I do. Calm yo t*ttaaaaysss," Paris spoke vaguely about injustices that were likely in reference to her feelings about Leaving Neverland.

"I didn’t mean to offend by expressing that t*tties should be calm," Paris wrote. "I know injustices are frustrating and it’s easy to get worked up. But reacting with a calm mind usually is more logical than acting out of rage and also.... it feels better to mellow out." She then added, "Smoke some weed n think about the bigger picture. Chillax my dudes." So it would seem that, for the time being, Paris prefers to keep her name and voice out of things regarding the documentary.

While Paris hasn't made an official statement directly related to Leaving Neverland, other members of the Jackson family have spoken out against the documentary. Marlon Jackson, who was Michael’s older brother, told Gayle King on CBS This Morning that he believes the allegations in the documentary are false.

"This documentary is not telling the truth," Marlon said. "There has not been one piece of evidence that has corroborated their story."

Taj Jackson, Michael’s nephew and his brother Tito Jackson's son, also defended his uncle in the same interview. "I grew up in it," he said, of attending sleepovers at Neverland Ranch. "So for me, it wasn't odd. You know, I think to the outside world, yes, I think it can be odd… But I think the fault on my uncle was he just – he didn't have that bone in his body to look at it the other way... his naiveté was his downfall in a way. And I think that's what hurts me more than anything is knowing his innocence, but then knowing how the world is."

So far, Michael’s brothers have been the most vocal about Leaving Neverland and in defending Michael, but Paris and her brothers have remained mostly silent about the film and its controversial subject matter.