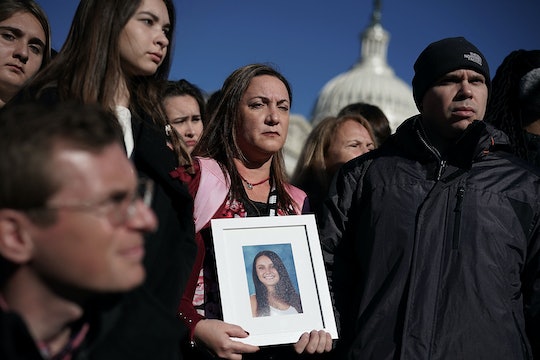 Valentine's Day rolled around on Thursday, and while most people were trying to decide how to spend this day dedicated to love, the families of the Parkland, Florida shooting victims are perhaps just trying to get through the day. Because it's been one year today since a lone gunman walked into Marjory Stoneman Douglas School and killed 17 students and staff members. Everyone is dealing with the grief differently, I'm sure, but one Parkland mom's letter to her daughter offered a glimpse into what so many of these families are going through on this tragic anniversary.

Lori Alhadeff's 14-year-old daughter Alyssa was one of the victims of the mass school shooting on Feb. 14, 2018, according to ABC News. In the 12 months that have passed since that awful day, she has channeled her grief to affect policy change. For instance, according to the New York Post, Alhadeff won a seat on the Broward Country school board and has started a nonprofit organization called Make Our School Safe.

Many might remember Alhadeff for the impassioned and gut-wrenching plea she made to President Donald Trump that was captured on CNN after her daughter's death. In the video, she asks Trump to please do something because she had "just spent two hours planning my daughter's funeral, who is 14."

While this mom might have been trying to make the world a better place in the wake of her daughter's death, she took the one-year anniversary as a way to reflect. On the daughter she lost, and the life she left behind. Earlier this week, Alhadeff shared the letter on Dear World, and opened with a memory of the last time she saw Alyssa.

"It’s Valentine’s Day. A day full of love, chocolates and flowers," she began. "For me, it is more than that now. Last Valentine’s Day was the last time I saw you. You wore a black and white dress. Your long dark hair dangled. Your makeup looked just right. Of course, your white Converse sneakers protected your feet as you walked in to Marjory Stoneman Douglas High School."

She continued by saying she remembered how much her teenage daughter wanted a Valentine, and how much she wanted that for her. Alhadeff also reflected on the last words she said to her as she sent her off to school: "I love you."

The heartbreaking letter continues by updating Alyssa on what's been going on in the past year. Her soccer team wears the number eight on their uniforms in her memory. The family got a dog. Her brothers miss her. Alhadeff also told her about the law that was passed in her name in New Jersey, Alyssa's Law, which calls for all schools to be equipped with silent panic alarms linked to local law enforcement.

But mostly, Alyssa's mom just wanted her to know she missed her. That she would never forget her smile. "It feels like yesterday. I just want you back," she concluded her letter.

One year later, I'm sure the Parkland shooting victims' families would all agree. Whatever might have happened in the past year, they just want their loved ones back.

If you want to donate to organizations in honor of the Parkland victims, you can donate to Make Our Schools Safe here. You can also donate to Everytown For Gun Safety, or March For Our Lives, or the Brady Campaign, all of which aim to end gun violence.