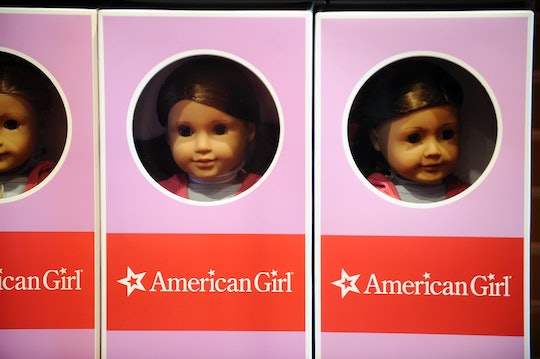 If you thought the whole "Karen" element of 2020 was over, you may want to think again. Recently, a parody "Karen" American Girl doll meme has gone viral and it has people divided over whether or not it's funny or offensive. It's even prompted the company to respond.

On June 29, digital content creator Adam Padilla, also known as Adam the Creator on social media, shared a fake ad on Facebook for a new "Karen" American Girl doll that looks significantly different from some of the company's previous toys. For those who don't know what "Karen" means in this situation, the slang dictionary defines a "Karen" as an "obnoxious, angry, entitled, and often racist middle-aged white woman who uses her privilege to get her way or police other people's behaviors," according to Dictionary.com.

In honor of such Karens everywhere, Adam the Creator shared a parody ad for a "Karen" doll. The meme features the doll with a light blonde bob cut, a purple track suit, a handgun, a shopping cart, and the angriest eyebrows you ever did see.

"She's an independant thinker who refuses to wear a face mask in public places!" the fake ad, which incorrectly spelled the world "independent," reads.

The response to the "Karen" doll has been all over the map. Many people who commented on Adam the Creator's Facebook post seemed to realize pretty quickly that this was a joke. "I knew it wasn't legit when they spelled 'independent' wrong," one person commented, while another said, "man its not real i wanted to buy one."

Still, some people were not impressed. One Twitter user named Donna took to Twitter to contact the Wisconsin-based company to complain about the post. "@AmericanGirl I saw a post of an American Girl doll, Karen, who refuses to wear a mask and carries a gun as disgusting. Is this what we want to teach our children?" the Twitter user wrote to the company.

Initially, American Girl responded that they "were equally disgusted with this post." "Please be assured we are taking the appropriate steps to ensure this is removed," the company's response read.

In another tweet, the company said: "Thank you for taking the time to share this information with us. We were informed of this post a few days ago and are working with the appropriate teams at American Girl to ensure this copyright violation is handled appropriately."

In a statement to Romper, however, American Girl said that "American Girl has no intention of censoring this parody and anything shared to the contrary was in error."

"We apologize for any misunderstanding," American Girl tweeted on Tuesday.

So it looks like the "Karen" parody ad will remain as a viral meme, but don't expect it to be available in American Girl stores.