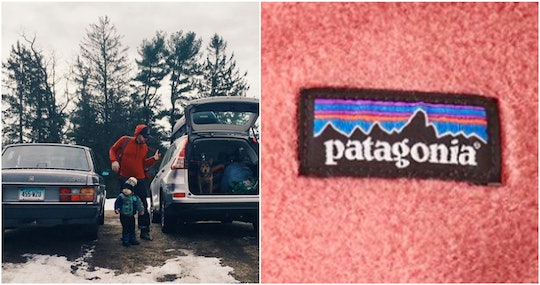 Why Are Millennial Dads So Obsessed With Patagonia?

Nothing sets my ovaries aflame quite like a dad in a Patagonia jacket carrying a baby in a tiny version of the same Patagonia jacket. There’s no doubt she’ll outgrow her $79 Nano Puff within the week, but when it comes to babies in Patagonia gear, practicality is besides the point. The jacket is more than just a jacket; it’s a symbol of her dad’s decades-long commitment to instilling in her a love of the Great Outdoors, or at the very least an appreciation for base layers. But how did the nation's dads come to be clad in lightweight heat-preserving shells and baffles? As self-identifying Patagonia Dad Josh N. explains to Romper, "They make good gear that lasts, fits and is affordable if you shop their sales." What he doesn't explain is how shopping the baby Synchilla fleece sales became a choice way to spend his spare time as a busy father-of-two.

Patagonia Dad, as we might call him, is absolutely everywhere. He’s at your child’s preschool, cropping up in breweries, roaming the dried goods aisle for trek mix ingredients, in the feeds of photographers like the woodsy Annie Hock. Check under your couch — like mice, he knows how to maneuver his body through tight spaces because he once watched a spelunking documentary. One glance and you *know* that when he gets home he will stuff his down vest into a closet full of more down vests, each a relic of past forays into the nearest REI and a symbol of the future trips he will take to collect his dividend. He may not have an opinion on diaper brands, but he knows the technical specs for all Patagonia jackets and fleeces dating back to 1995, and his blood is 100 percent traceable down.

I ask my friend to free associate with 'Patagonia Dad.' She replies: 'Baby Bjorn, slightly bearded, always allegedly training for a triathlon, 'How I Built This' podcast, integrity.'

It’s no wonder. Patagonia has preached quality and responsibility from the beginning. Founder Yvon Choinard created the brand as a peripatetic climber decades ago and has subsequently urged customers *not* to buy anything they don't need. As he told the New Yorker, he made a decision long ago not to make "'outdoorlike’ clothing for posers." Today, the company has a famously family-friendly headquarters and donates 1 percent of sales or 10 percent of its profits every year; they will happily replace your broken merchandise, they welcome you to trade in your old gear for something shinier. I cannot think of anything more ~dad~ than a sealed-zip with a lifetime guarantee.

The Patagonia movement is bigger than all of us — so big that we hold preconceived notions of dads and non-dads who boast the label. I ask my friend to free associate with “Patagonia Dad.” She replies: “Baby Bjorn, slightly bearded, always allegedly training for a triathlon, 'How I Built This' podcast, integrity.”

Now more than ever, Patagonia Dads are necessarily hip in all aspects of life. “You look like such a dad” might have been a burn 10 years ago, but today it implies that you commute on a bike and regularly contribute to a retirement fund, and that you look good doing it.

For evidence look no further than the iconic pages of GQ Style, whose editors once wrote that “for some people, wearing the right vintage Patagonia fleece is just as cool as wearing the latest piece off the Gucci runway.” ⚡ I think GQ is serious about that statement, but we outsiders to the world of fashion taken “Patagucci” and run with it into a meme. And, unlike most memes, it’s one that dads seem to be well aware of.

The same v serious GQ article asks the founders of the Patagonia Archive about the company’s “democratic nature”:

I do think some of the popularity that you’re seeing in a place like NYC, and we have it here, is that you can see somebody across the farmer’s market and see somebody in a Patagonia and be like, Hey, we share something. And it for sure doesn’t mean they’re pinnacle in their sport. They might be very deep into nonfiction. Maybe it’s growing heirloom tomatoes — it’s about somebody who gets the process of doing things right. And I think that’s a seductive message that people are waking up to and wanting and craving.

Brb, adding “heirloom tomatoes” and “nonfiction” to my Patagonia Dad free-association list. It’s a label on fire, and nothing’s gonna put it out.

But, as GQ also points out, Patagonia’s fashion moment is in part due to the industry’s ~pivot~ to social and environmental activism.

And this is what Patagonia Dad is all about. Sure, he knows that Osprey is the best brand of backpack and he looks damn good in running gear, but he also knows that he doesn’t need to justify his feminism with the fact that he has a daughter. As the famed psychologist Esther Perel explained at a recent panel hosted by Plum Organics and attended by Romper, the idea that fathers are responsible for anything but the financial security of a family is new: "One of the most beautiful changes to the modern family is the invention of modern fatherhood," she told the crowd.

The concept of the outdoorsy dad has its origins in the mid-nineteenth century, around the time transcendentalists retreated to ponds to philosophize about the importance of the natural world. One thing led to the next, and by the 1930s, thousands of medium-equipped dads in station wagons poured into newly established campsites across the nation. Outdoorsy dad has become a cultural touchstone — we know this because he’s a self-contained category for holiday gift guides (FYI, your dad needs a vacuum-insulated pint glass). For decades outdoorsy dad has loaded his kids into the car and driven into the woods armed with only a tent, some ramen noodle packets, and a box of Nesquik.

The Patagonia Dads of today still teach their children to Leave No Trace, but they also teach them about gender inequality and racism and social responsibility.

Somewhere on this timeline, he transformed. The Patagonia Dads of today still teach their children to Leave No Trace, but they also teach them about gender inequality and racism and social responsibility. Teachable moments in the woods are not limited to how to pitch a tent, or what the hell to do when you forget a roll of toilet paper — they now include encouraging boys to express emotion and support their sisters, showing girls how to stand up for themselves, and telling everyone in hearing range that it’s OK not to conform to society’s benchmarks of either gender.

Where Patagonia was once just a really good gear company where dads bought hiking poles, the brand is now something bigger than all of us. The U.S. is at a juncture. Global warming is not in the vocabulary of the executive office, and the head of the Environment Protection Agency recently implied that he thinks climate change could benefit the planet. Meanwhile, Patagonia Dad sits on his couch in his fair-trade fleece, listening to David Attenborough’s tired voice tell us that if we don’t get it together yesterday, hatchling sea turtles will keep mistaking street lamps for the light of the full moon and slowly expire in city gutters. A single tear rolls down his cheek.

Patagonia Dad gloms onto the brand because Patagonia stands for everything he wants his children to have. As Patagonia fan and dad-who-taught-his-own-kids-to-ski Tommy Perkins of Los Angeles, Calif., puts it in a text message, the appeal is "what the brand stands for." Presumably staring into the middle-distance, he adds, "Great company values." His two children both wear Patagonia jackets, and he himself finds heavy use for his own Patagonia gear in the mild SoCal weather.

Patagonia Dad is there in summer and winter. He is in the woods, the suburbs, and he is in Hollywood. Chris Hemsworth was revealed to be a Patagonia Dad in aesthetic if not brand when he debuted his baby-carry and outdoors man-bun several years ago (below, he wears Mammut).

As it turns out, Hemsworth was reared on the spirit of Patagonia.

Alongside him in the celebrity realm are Patagonia Dads Ryan Reynolds, who wears Eddie Bauer and is busy saving rainforests, and Prince William, who isn't afraid to rock a puffer on the job. (Chris Pratt is an outdoorsy and involved dad but ultimately more of a Bass Pro Fishing Shops Dad for his wildlife kill count.)

He ~cannot~ wrap his head around spending $500 on a stroller but would drop the same amount on a family-sized tent if he could.

In the same way that someone who is not a parent might identify with the label “Target Mom,” someone who is not a parent might also identify with “Patagonia Dad.” I ask my boyfriend, whose favorite activities include feeding a wood-burning stove and taking note of how quickly the temperature rises as a result of this effort, if he identifies with the concept. He does, and tells me that he ~cannot~ wrap his head around spending $500 on a stroller but would drop the same amount on a family-sized tent if he could.

Historically, roughin’ it in the woods has been widely seen as a gendered activity, taking its place beside hunting, fishing, climbing, and building tiny ships in glass bottles. Despite women being, you know, pretty good at these things, I can’t say I’ve ever seen a carabiner on a Mother’s Day gift guide. But when I texted the women in my life about Patagonia Dad and what he even *is*, their eye rolls often conceded a you know what, I’m kind of a Patagonia Dad, too — you don’t have to be a dad, or a man, or even like comparison shopping for family-sized tents to identify with what he stands for. In this hellscape of current events, we are all kind of Patagonia Dad, aren’t we?

Viewed as a macro trend, the patterned microfleece snap jackets in which they stuff their unsuspecting tots represent crucial life skills like grit, survival, and how to use an aeropress.

And you know what? Those will outlast a killer return policy by a lifetime.