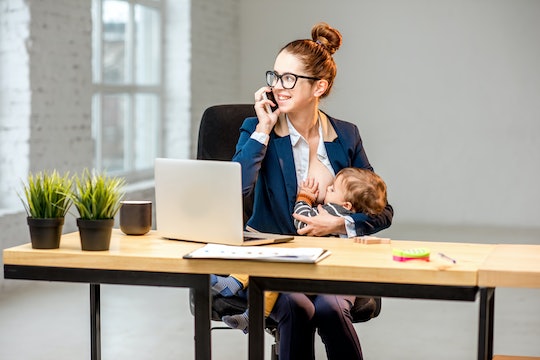 If you're a mom and you work outside of the home, then you're probably highly aware of how much of an impossible balancing act it can seem at times. The logistical challenges are only magnified if you're a breastfeeding mother who needs to pump while on the job. Between remembering all of the pumping parts and supplies, taking pumping breaks every few hours, storing the expressed milk, etc., there's just so much to keep track of — on top of your normal job responsibilities. However, the Patagonia VP's comment to a breastfeeding mom during a work meeting will restore your faith in humanity.

Earlier this month, Holly Morissette — a new mom who works as a recruiter at Patagonia — shared an inspiring exchange she had with her company's male vice president, Working Mother reported. See, Morissette is able to bring her infant to work with her thanks to Patagonia's on-site childcare. Which is clearly a game-changer for this working mama. And judging by the VP's comment to Morissette while she was breastfeeding on the job, other companies should definitely be taking note.

"While nursing my baby during a morning meeting the other day after a recent return from maternity leave, our VP (Dean Carter) turned to me and said... 'There is no way to measure the ROI on that. But I know it’s huge,'" Morissette wrote in a now-viral LinkedIn post. (ROI is return on investment, and it attempts to directly measure the amount of return on a particular investment in relation to its cost, according to Entrepreneur.com.) But seriously, though. How cool is it that Patagonia's VP — in a financially geeky sort of way, yes — praised this new mom for making such a huge investment in her child's future?

"It got me thinking... with the immense gratitude that I have for on-site childcare at Patagonia comes a responsibility to share a 'call to action,'" Morissette continued. "A PSA to tout the extraordinary benefits that come along with not asking employees to make the gut wrenching decision to either leave their jobs or leave their babies. TO HAVE TO LEAVE THEIR JOBS OR LEAVE THEIR BABIES."

Morissette went on to say that she hopes her PSA will inspire other employers to "think differently about how to truly support working families." She ended her post with an impressive statistic about Patagonia, along with a shoutout to her employer for leading the way.

It’s no wonder that Patagonia has 100 percent retention of moms. Keeping them close to their babies keeps them engaged. And engaged mothers (and fathers!) get stuff done

Plenty of fellow parents chimed in to share their personal stories of returning to work after welcoming a child. And let's just say most of them didn't measure up to Morissette's experience.

"I remember after having my first child, I returned to work after 3 months of no pay, guilt-ridden about leaving my baby, and found myself having to pump in a dark storage closet every day because my workplace at the time was not set up to accommodate the needs of new mothers," one person wrote. "Thank you to companies like Patagonia for leading the way to show how important it is to support new parents."

"25 years ago I was determined to give my daughter the best start I could, and pumped at work. There was literally nowhere to go except a tiny office supply closet with no lock," another fellow working mom wrote. "I put a sign on the door that said 'new mom at work' and was never so proud. It's encouraging to hear there are companies looking for ways to keep working moms and babies TOGETHER--what a concept! Yay Patagonia."

Thanks to the Affordable Care Act (ACA,) also known as "Obamacare," companies with 50 or more employees are required to allow breastfeeding moms “reasonable break time” to pump milk throughout the day, according to HuffPost. Furthermore, the employer must also provide a space that is not a bathroom in order to pump. Unfortunately, though, these breaks aren't required to be paid.

I worked outside of the home after giving birth to my first two children — whom a breastfed. And at any given point in time, I either felt like I was slacking as an employee or failing as a parent. Although I was lucky to be able to pump at work and had a pretty flexible schedule, having on-site childcare and being able nurse my babies on-demand would have been heavenly.

Personally, I would love to see more companies get on board with family-friendly benefits like the ones enjoyed by Patagonia employees. Because Morissette hits the nail on the head: No one should have to choose between their job and their baby.

More Like This
Can You Burp A Baby Too Hard? A Pediatrician Shares Tips For Gassy Tummies
Cry-It-Out: The Popular Sleep Training Method, Explained
The Best Toys For 6-Month-Olds Will Do More Than Just Keep Them Occupied
Here’s What To Do If Your Baby’s Nose Bleeds After Suctioning