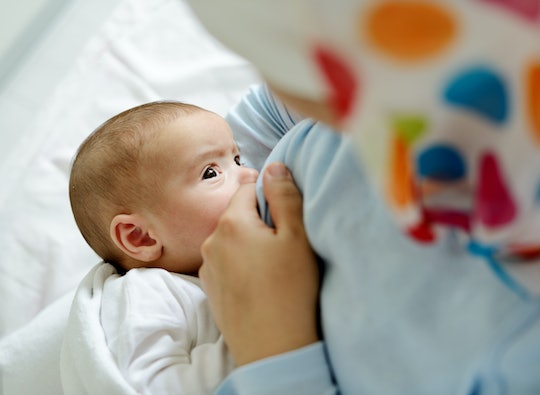 3 Best States For Breastfeeding Moms, According To This Eye-Opening Guide

Have you ever wondered which are the best states for breastfeeding moms? If you've ever been in a position where you struggled to find a place to pump or breastfeed your child in public, had to fight with your employer for your breastfeeding rights, you probably have wondered about this. Because, as a comprehensive new report details, not all states are doing such a great job of protecting a mother's right to breastfeed or offering her support to continue to do so once she's in the workplace.

Mamava, a company that creates freestanding lactation suites, has decided to make finding the right state for breastfeeding moms easier for parents. The company recently released a truly comprehensive guide to state-by-state breastfeeding laws on a five-point scale system. To reach their analysis, each state was evaluated through a one to five "drop" system, with the worst states only being awarded one drop (meaning state law might protect a woman's right to breastfeed in public but no further workplace laws have been implemented) up to five drops, which Mamava explains as "The gold standard."

Now, here's the big spoiler alert: Not a single state received the gold standard five drop award, which tells me every state has a little bit of work to do. That being said, there were three states that stood out above the rest with four drops each.

California also went ahead and made it a law for all major airports to have breastfeeding spaces after security checks, even before the 2018 FAA act requiring lactation spaces in all large airports by 2020 was passed.

All employers with more than five employees in Illinois must provide space and time for a breastfeeding mother to pump, according to the the Workplace Act, which is pretty impressive since the FLSA set the threshold at 50. The state of Illinois also removed the phrase "unpaid break time" to ensure women could use their paid breaks to pump.

Beyond that, as Mamava notes in its guide, Illinois also requires all public schools and charter schools to provide spaces that are not bathrooms for breastfeeding students, and in 2016 passed the Lactation Accommodation in Airports Act to ensure women can find space to pump after security.

The last state on the list of heavy hitters is New York, a state that was far ahead of its time by being one of the first to protect a woman's right to breastfeed in public way back in 1994. Much like California and Illinois, all employers in New York are required to offer break time and a space that is not a bathroom for breastfeeding moms to pump. As Mamava notes in its guide, the state also mandated that lactation spaces be added to all public services that offer help to families like the Department of Health and Mental Hygiene, the Administration for Children’s Services, and the Department of Social Services.

These are the three best states for breastfeeding moms, according to Mamava's analysis. So if you're thinking of having a baby, this is definitely good information to have in your pocket.