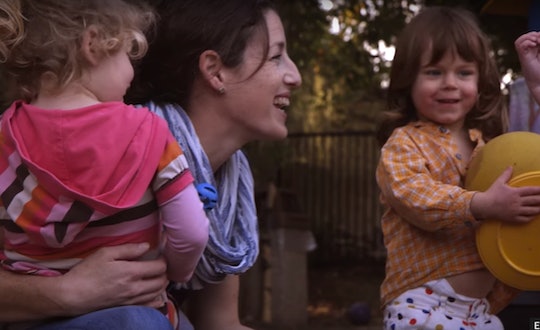 Any working parent knows that trying to balance your career and your family life is not easy — and that often tends to be a much bigger struggle for women than it is for men. While it's not often that parents tend to feel particularly supported by their employers to be good workers and good parents, a growing number of companies are getting the memo that helping working parents out can end up benefitting them as well. One particularly impressive example? Outdoor clothing company Patagonia. Patagonia's on-site child care program has been offering a unique solution for the dilemmas of employees with children for more than 30 years, and honestly, it seems like a pretty ideal solution.

More Like This
Why Mattel Wants Your Kid's Old Barbie Dolls
Vaccinated People Can Ditch Masks. Where Does That Leave Kids?
Pregnant Olympian Shawn Johnson Cried When Her Daughter Was Sad At Drop-Off
Biden Proposes Plan To Give Every Child Free “High-Quality” Preschool

According to Slate, Patagonia employees can bring their kids to work with them, and drop them off in the on-site daycare, where their children get to run around outdoors, play, and generally have a grand ol' time. Aside from the convenience factor, it also means parents can spend more time with their kids (during the commute, at lunch, during breaks) and it also means that nursing moms aren't stuck pumping in their offices (they can just go nurse their babies directly). And if their children are older and go to school during the day? Patagonia will bus them back to the company after school where they can hang out until mom or dad has finished the day. Amazing, right?

Although child care is often viewed as a personal issue, and a responsibility each employee has to navigate without letting it get in the way of his or her career, companies like Patagonia have realized that, by making it a company issue, they can actually solve a lot of issues around retention and turnover, as well as productivity, engagement, and morale. For many women, day care costs can be so expensive that going back to work just doesn't seem worthwhile compared to what they will have to give up in terms of family time. But when a female employee quits, the company takes a financial hit, too.

According to Quartz, on average, about 79 percent of women return to work within the first five years after giving birth, but the retention rate among moms at Patagonia is 100 percent. And given that fact, it's also no surprise that about half of all managerial and senior roles at the company are held by women. If you've been able to pretty much pick your career up right where you left it, you're in a better position to move through the ranks the way men are typically better able to do.

But not only do women return to Patagonia after they have kids, they are actually less likely to leave in general then their non-parent colleagues. In an essay for Fast Company, Patagonia CEO Rose Marcario noted that "turnover among Patagonia employees who use its child care program is 25 percent lower than in its overall workforce," which makes a lot of sense (why leave when you've got such a great, supportive setup?). But it's not just a perk, as far as she's concerned — it's a necessary investment:

We don’t have to scratch our heads and wonder why there's an alarming lack of women in leadership, boardrooms, and public office. Women will never be able to effectively 'lean in' without the proper economic, social, and community support for the most critical work of all—raising the next generation. The good news for skeptical business leaders, though, is something I've learned firsthand: Supporting our working families isn’t just the ethical thing to do (which, frankly, should be reason enough for responsible leaders); it will also balance out financially.

From a numbers standpoint, it's clear that she's right. Marcario said that Patagonia's child care center costs around $1 million per year — after parents pay their own share. That's a lot, obviously, but the company also gets a pretty hefty tax deduction of about $500,000 total (aka, 50 percent of their operating cost). The rest, she explained, is almost entirely recouped through retention and engagement, so much so that Patagonia estimates it makes back approximately 91 percent of its child care costs.

That sounds pretty win-win, so why is employee-supported child care so hard to find? One major reason, obviously, is that not all companies are able to fund such a major project, even if it makes sense financially. And according to Bloomberg, child care is highly regulated, and creating an on-site child care program that runs smoothly isn't going to happen overnight (after more than three decades, it's fair to say Patagonia has had a lot of time to work out the kinks). But the biggest reason is probably the prevailing idea that childcare isn't a company's problem, or that catering more to parents will end up somehow lowering productivity. As Dean Carter, a vice president of human resources at Patagonia, explained to Bloomberg, "There is some fear that you may not get a return on child care, [or] that you might not anticipate potential liability."

The good news, at least is that the idea does seem to be catching on, albeit extremely slowly. Google, for example, currently runs four child care centers for its employees, and moms get 18 weeks of paid leave, according to Parents. Software company SAS offers subsidized childcare for employees, as well as an on-site summer camp. gNappies offers on-site child care for its employees at its Oregon headquarters, and in it's U.K. office, parents are offered the chance to work remotely, according to The Guardian.

For now though, it's safe to say that most working parents in the United States probably shouldn't expect their employer to jump at the chance to go full-Patagonia on their work/life balance stance. Given that paid maternity and family leave is still something far too few families actually get, there is still so much work to do until parents — and especially mothers — can feel truly supported in their careers.