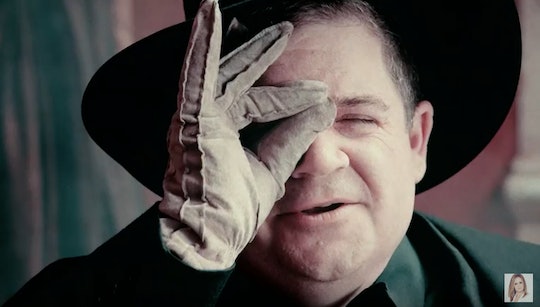 We've all seen them, haven't we? The "crisis" pregnancy centers for women who are struggling with their pregnancy for whatever reason. Women might seek out one of these centers for any number of reasons — for counseling, for advice, for medical referrals and information about abortions. Except that's not necessarily what these women will get. As Samantha Bee pointed out on Friday night's episode of Full Frontal (with a little help from the ever-brilliant Patton Oswalt) these clinics are using government money to deceive women. And Patton Oswalt's crisis pregnancy center sketch is important for this reason: It exposes a terrible truth that many should already know.

These clinics (which frequently advertise their services on billboards with lines like, "Pregnant? Scared? Alone? We Can Help!") are actually in existence for one reason only: to stop women from having abortions. In the Full Frontal segment, Oswalt, dressed in a cape as a magician, rightly calls these crisis centers, "the ultimate hustle — a conception deception." He also says that the clinics "hide behind the fig leaf of the First Amendment, which I guess gives them the right to trick scared teenagers into not seeing a doctor."

He's not wrong in his biting criticism either. Women are drawn to these clinics in times of great need and tricked into thinking they are seeking some form of medical advice. Some of the staff members in the clinics even do wear white coats and offer free ultrasounds in an attempt to scare women out of having the procedure performed later on.

While Oswalt used his theatrics and way with words to make a strong point, the show also featured a skit, "(Not an Actual) Dr. Bee", where host Samantha Bee pretends to perform an ultrasound while making the patient watch falsified abortion videos with her eyes taped open. The show also features an interview with National Abortion Federation president and CEO Vicki Saporta, who explains how these clinics work.

“They con women into thinking that they provide the full range of reproductive health services, when they absolutely do not,” Saporta says. “Most of these fake clinics do not have licensed medical staff. Women are often given false ultrasound results, to make it seem that they’re much further along in their pregnancies than they are.”

According to Saporta, these "fake" clinics outnumber actual abortion clinics in the United States two to one. Cherisse Scott, a mother who appeared on the Full Frontal episode and had been duped by the clinic, talked about her struggles after feeling forced into having her child... and how the clinic completely vanished from her life after she had her sons and times got tough. She talked of living on food stamps, and said that (while she loves her son) if she had it to do over again, she would have had the abortion.

So kudos to Samantha Bee and Patton Oswalt for shedding some much needed light on the seedy practice of fake pregnancy crisis centers. They have been allowed to hide in the dark for far too long.