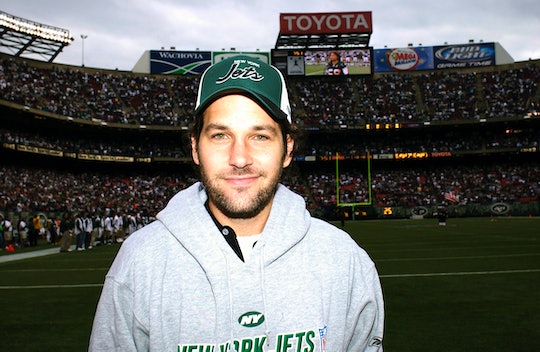 Imagine standing in line to cast your vote. It's taking hours, you're tired, maybe it's raining a little. And suddenly someone gives you a snack. Now imagine it is everyone's favorite celeb dad who is filled to the eyeballs with goodness. That's right, Paul Rudd handed out cookies to voters in line. In the rain, no less. Because this guy can't seem to help giving off that big dad energy, even when he's lending a hand to people who are not his kids.

Brian Rosenworcel was standing in line waiting to vote at Barclay's Center in Brooklyn, New York, where people were lining up hours before the polls even opened, when he saw the Anchorman actor handing out cookies to voters who were standing in the rain waiting to cast their ballots. Rosenworcel told CNN that Rudd didn't simply hand out cookies but also took the time to chat with people. "I was standing in line and I thought Paul was just there to vote, but then he starts handing out cookies to people in line," he told the outlet. "And he waited to greet people as they exited to say thanks for voting in the rain."

Rudd, who is dad to 16-year-old son Jack and 11-year-old daughter Darby with his wife of 17 years Julie Yaeger Rudd, stood in the rain wearing a face mask, a baseball cap, and the classic dad uniform of a jacket over a hoodie. He thanked people for voting, gave them blueberry and cream cookies wrapped in plastic, and quietly went on his way.

If only he'd had a grill on hand, he would probably have made people hot dogs and burgers. Because he is 100% that dad. Rosenworcel shared video of the event on Twitter and naturally it's racked up more than 4 million views.

Rudd actually spoke to NowThis about his decision to deliver cookies to voters waiting in long lines in the rain. "Anyone who is waiting in line deserves to be kind of thanked, encouraged and recognized, and that's what we wanted to do," the actor told the outlet.

Rewarding good behavior, classic dad move. And so many Rudd fans took to social media to wax poetic about him when they saw he had been handing out cookies, like this person who wrote, "I love Paul Rudd and I wish he was my dad." Another person wrote, "can paul rudd pls adopt me, he seems like the best dad and is actually old enough to be my father."

The general consensus about Paul Rudd handing out cookies to voters in the rain appears to simply be "I love him." Whether that's a fatherly love or more the kind of love two people share after the kids are in bed is entirely up to you. There are all sorts of ways to love Paul Rudd, a kind human and giver of delicious cookies.