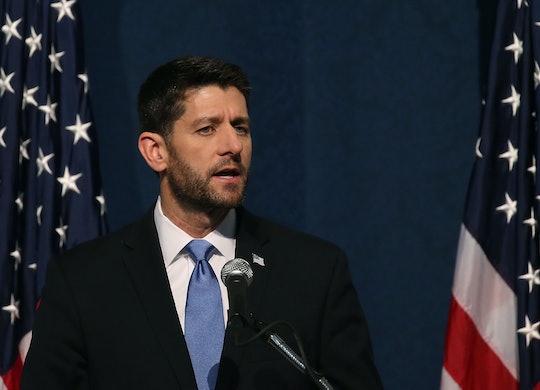 Paul Ryan Comments On Trump’s Muslim Ban, Finally Says What We’ve Been Waiting To Hear From The GOP

On Monday morning, less than a week after the tragic shooting at the Inland Regional Center in San Bernardino, California, Donald Trump did the exact thing we've all been (sadly) waiting for him to do: Trump proposed a ban on all Muslims in the U.S. while our representatives determine "what is going on" before allowing them to enter. On Wednesday, December 8, Speaker Paul Ryan fired back, noting Trump's statements are not what the GOP is about.

At a press conference, Ryan told reporters that Trump's comments are "not who we are as a party," and he even went so far as to say that Trump's intolerant comments "violate the Constitution." His comments do little to quell the fears of the American public (and reasonable Republicans), but still, his words carry weight. They remind us that regardless of whatever ludicrous comment Donald Trump makes on whatever the issue of the day is, not every Republican stands behind his comments. And as the likelihood that Donald Trump may become the GOP's Republican nominee increase on a day-to-day basis, Ryan's statement stands as a pillar of hope: Maybe the inevitable won't happen; maybe the GOP will right its wrongs — or at least in this case, its very, very Donald wrong.

This is not conservatism. Some of our best and biggest allies in this struggle and fight against radical Islam terror are Muslims.

On an on-air segment that took place on CNN, Trump stood by his ban on Muslims entering the United States. When asked how Trump would feel if the GOP moved away from Trump, the presidential hopeful stated:

Following Ryan's comments, however, I wonder if Trump will soon begin to sing a different tune.

On December 7, Donald Trump released a statement that read:

He later stood by those comments at an event that took place in Charleston, South Carolina — and again on a televised segment on CNN. Republicans and Democrats have condemned Trump's plans, citing how "irresponsible," "irrational," "idiotic," and "prejudiced" his rhetoric has become.

Ryan's words show promise and a departure from the narrative (however temporarily) that it's the Trump show and the GOP is just a part of it. However, Ryan was asked if he'd support Trump if he was nominated in 2016, to which Ryan responded:

I'm going to back whoever the Republican nominee is.