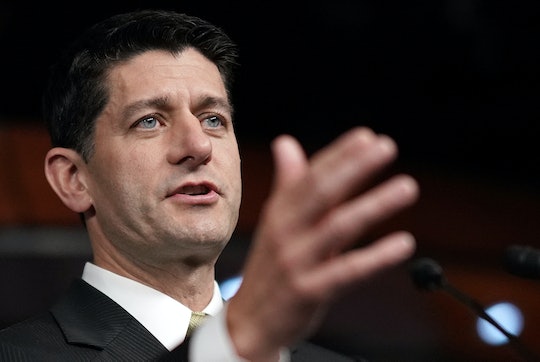 There are a few potential ways of looking at Congress' almost comically archaic dress code, the first being that it is... well, comically archaic obviously. The idea of having a dress code to keep women from showing their bare arms and shoulders is medieval at best, dangerously backwards at worst. Although I guess it's good to know my lady shoulders are so distracting they could quite literally shut down a government if needs be. A useful talent for shoulders. Now, it seems that Republican Speaker of the House Paul Ryan has opted to make the dress code more 20th century-friendly (still not the 21st century, but bless his little heart for trying).

Earlier this month, a female reporter was allegedly asked to leave the Speaker's lobby (where reporters generally convene to question lawmakers) because she was wearing a sleeveless dress, according to CBS News, and her naked arms were deemed "inappropriate." The reporter even ripped pages out of her notebook to fashion sleeves but was still turned away. It turned out this was all part of the current dress code, which does not allow women to wear sleeveless tops or sleeveless dresses, even in the extreme heat of a D.C. summer. News of the dress code traveled fast. And was not especially well-received by perspiring women everywhere.

So, Paul Ryan has decided to step in and heroically standing up for a woman's right to bare arms. How, you ask? Well, the Speaker of the House decided that perhaps allowing a little peep toe shoe or letting a lady's arms fly freely about, naked as all get out, might not do any harm. No word yet on adornment or whether or not the naked arms need to be left plain and modest. (After all, everyone knows bracelets are like make-up for your wrists.)

Ryan said during a press conference on Thursday,

This is nothing new and certainly not something that I devised. At the same time, that doesn’t mean that enforcement couldn’t stand to be a bit modernized. Decorum is important, especially for this institution and a dress code in the chamber, in the lobby, makes sense. But we also don’t need to bar otherwise accepted contemporary business attire.

To be fair to Ryan, the dress code has been in place for some time and he's right, he wasn't the one who came up with the notion. And yes, men have to comply with a similarly restrictive dress code.

The difference being, women are called out as "inappropriate" when they dare to show their arms. Men are not. So congratulations to Paul Ryan, a man who isn't afraid to work in the presence of a woman's visible armpit and the like. You're a brave man, Paul Ryan. Way to go.