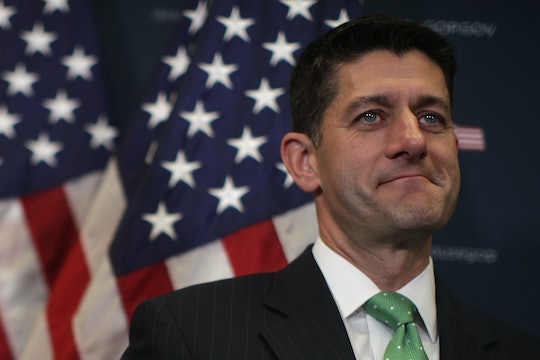 During Thursday night's 72nd annual charity dinner for the Alfred E. Smith Foundation, House Speaker Paul Ryan gave the keynote speech, which is traditionally full of lighthearted jokes about top political figures. But in today's climate, something felt off, because Ryan's Donald Trump roast at the Al Smith dinner only served to highlight Trump's unprecedented unfitness as a president, and the fact that Ryan played a key role in installing him in the most powerful position in the world. Watching someone give their boss a gentle ribbing is one thing, but Trump's actions are no longer funny.

Make no mistake, the jokes were accurate, and if they'd been delivered during any number of late night talk show monologues, they would have been well-received. But Ryan telling them felt much like Sean Spicer's appearance at the Emmys; it's no use pretending that you're "in on the joke" when that joke is the complete upheaval of all the democratic processes that keep the United States glued together at the seams. Ryan was one of the Frankensteins that helped create this monster, and if he truly understands how outrageous Trump's behavior is, he should be saying that to Trump, not a bunch of cronies in a banquet hall.

"Enough with the applause," Ryan began. "You sound like the cabinet when Donald Trump walks into the room." Yes, very funny, Trump surrounds himself with yes-men and even has a folder full of pro-Trump propaganda delivered to him twice daily, according to Vice News. But Ryan forgets that he is one of those yes-men. He even wrote Trump's blurb for Times's "100 Most Influential People" this past April. "Never afraid of a battle, he has made it his mission to fight for those who feel forgotten," Ryan wrote at the time. "Where others would pivot, he stays true to who he is." (According to Politifact, Trump "changed his position on a dozen key promises and positions" in his first 100 days.) Ryan even praised Trump for the way he "completely rewrote the rules of politics and reset the course of this country." That much is true, but why are we talking about that like it's a good thing?

Ryan also poked fun at the fact that Trump's White House has seen more turnover than your local McDonald's: "The truth is the press misunderstands and never records the big accomplishments of the White House. Look at all the jobs that the president has created. Just among the White House staff!" Yes, it's hilarious that Trump lost his chief of staff, deputy chief of staff, and chief strategist in his first six months in office. And that he's now on his fourth communications director, Hope Hicks, who's best known for not communicating with reporters and doesn't even have a Twitter account.

While we're on the subject of Trump's favorite medium, let's explore that a bit, shall we? When Trump tweeted about Morning Joe's Mika Brzezinski in June, claiming that she had hounded him for an interview while "bleeding badly from a face-lift," several members of Congress wasted no time in calling out his sexist, inappropriate, and untrue claims. Meanwhile, Ryan was tweeting about withholding funds from sanctuary cities. During his weekly press briefing later that day, Ryan was forced to address the tweets. "I don’t see that as an appropriate comment," he said, according to the Washington Post. Way harsh, Tai! You really let Trump have it!

Ryan is the Speaker of the House of Representatives. He's third in line for the presidency, which, depending on how special counsel Robert Mueller's investigation turns out, could actually mean something. Trump's temperament, his inexperience, and his willful ignorance towards even the most basic responsibilities of his office are no laughing matter. People's lives are at stake. The fate of the world is at stake. It's time for Ryan to take responsibility for electing Trump, and do something about it.