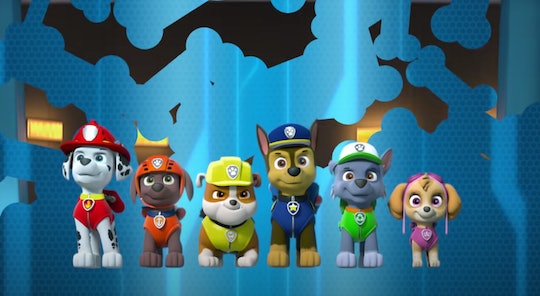 Just when you thought that the upcoming PAW Patrol animated flick was just for kids, the new PAW Patrol: The Movie's voice cast has revealed there's a little entertainment for parents, too. That's right, parents can expect to hear recognizable voices from celebs like Kim Kardashian, Jimmy Kimmel, and Dax Shepard.

Kardashian, Kimmel, and Shepard are just some of the celebrity parents who will lend their voices to the animated film, along with the legendary director Tyler Perry and Fresh Off The Boat actor Randall Park. But it's not just all about the big names; there are plenty of young actors who will play a role in the new film, too. The voices of Young Sheldon star Iain Armitage, Black-ish star Marsai Martin, as well as Will Brisbin and Yara Shahidi will also make appearances in the movie.

In PAW Patrol: The Movie, which will premiere in theaters in August 2021, Ryder and his trusty team of pups — Chase, Marshall, Rubble, Zuma, Rocky, and Skye — are called to action for a new mission. "Ryder and the pups are called to Adventure City to stop Mayor Humdinger from turning the bustling metropolis into a state of chaos. Get ready for exciting missions, high-stakes rescues, new pups, and amazing new vehicles making this the biggest PAW Patrol story ever!" Nickelodeon said in a recent press release.

It's unclear if these stars will lend their voice to your kid's favorite PAW Patrol pups, or play a brand new character. Either way, their kids are probably extremely excited about their parents' new gig. Back in 2017, Kardashian took her son Saint to see PAW Patrol Live! and Kimmel name dropped the show during a monologue in June. Even Shepard has filmed a PSA warning parents about "the PAW Patrol years." "As a parent who endured (and survived) my kids' PAW Patrol obsession, I'm here to welcome YOU fellow parents to the PAW Patrol years," he wrote on Instagram in August.

Hopefully their roles will be revealed within the coming months. But in the meantime, mark your calendars for August 2021 and prepare yourselves for even more PAW Patrol.