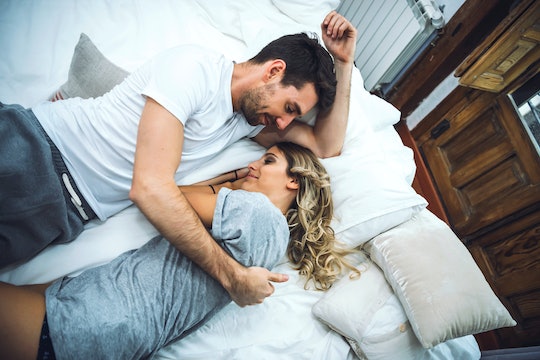 Kegels Won’t Solve Your Postpartum Sex Issues, So Why Do We Keep Saying They Will?

Those first few times having sex after a baby were brutal, and that was even with me having a C-section. It's not something we talk much about, but postpartum issues with your pelvic floor are relatively common.

Pregnancy had messed up my pelvic floor muscles (those muscles that support your bladder, uterus and colon) and there was a moment while my husband and I were in the throes of passion that I thought, OMG. Did I just pee? Was that pee? I think that was pee. Turns out I had, in fact, lost a little control over my bladder and you damn well bet I didn’t tell a soul about that one. Why? Because none of my friends who had kids ever mentioned peeing during sex. Sneezing, coughing and laughing, sure, but sex? I had no idea who was leaking and not telling.

Dr. Sarah Collins, pelvic medicine and reconstructive surgeon at Northwestern Medicine Central DuPage Hospital, says pelvic floor injuries in women in general are very common — about one in three women are affected. “Immediately after delivery, most women probably have some sort of pelvic floor dysfunction and much of that is temporary and goes away on its own,” she says in an interview with Romper. The good news? “There a remarkable ability of the pelvic floor to recover after delivery.”

Many women are resigned to the fact that this is life for them, when actually there is usually something that can be done.

Many women who have given birth have this misconception that it’s normal to pee a little when coughing or sneezing. “Welcome to the club!” another mom told me brightly when I told her I feel like I need to constantly wear pads because coughing and sneezing left me having to change my underwear more often than I want to admit. And normalizing the issue through initiatives like Stayfree's campaign with author and celebrity Jenny Mollen on light bladder leakage is important to get the conversation going, but as Dr. Collins pointed out, the commonality of this issue doesn't mean it’s "normal." It’s not normal to leak urine, whether while pregnant, postpartum, or even in older age. Many women are resigned to the fact that this is life for them, when actually there is usually something that can be done. And it may be surprising to hear that Kegels aren’t always the answer.

Lindsey Vestal, a pelvic floor therapist, says that there is a misconception around urine leakage and Kegel exercises. “Pelvic floor therapy has really only been around for about 20 years, and it’s a relatively new topic. The full story really isn’t out there, but even Dr. Kegel, a gynecologist back in the '40s, didn’t advocate for doing a thousand of them mindlessly to address and fix any problem,” she tells Romper.

Here in the United States, pelvic floor evaluation and physical therapy is not part of postpartum care. Medical providers don’t even really see most moms until six weeks postpartum — one reason the American College of Obstetricians and Gynecologists is revising its postpartum recommendations to at least one visit in the first three weeks, with multiple check-ins in the first 12 weeks after birth.

“Most women who have intimacy issues after they’ve resumed intercourse after delivery probably don’t tell their doctors because they don’t have the opportunity,” Collins explains, “I’m a sub-specialist in urogynecology and here at Northwestern, we actually have a special clinic for more severe peritoneal lacerations that occur at the time of delivery. We see many women in those first six weeks postpartum and we continue to see them after their recovery from the injuries that they sustained.”

Regardless of what your symptoms are after you have a baby, sex can be a challenge for some couples in navigating these pelvic floor issues. The most common things that can happen are pain and leakage. Women who have a prolapsed uterus can have pain during intercourse, and that pain can cause them to lose interest in sex. After all, who wants to get it on when it makes you hurt?

The other common symptom is leakage of urine. Less commonly, women can leak stool, but as Dr. Collins states, this is probably underrepresented due to the embarrassing nature of it (the American College of Colon and Rectal Surgeons estimates as many as 40 percent of women have a rectocele).

While going through pelvic floor treatment, it’s important to think of it as a team effort, where both partners play a role in the recovery process.

Obviously leaking is something we don’t want while we’re having sex. If you’re leaking urine upon penetration, it’s probably due to stress incontinence (the same thing that causes you to leak with coughing and sneezing) and if you leak during an orgasm, it can be due to urinary urgency where the bladder muscles spasm when they’re not supposed to. All these conditions are treated in different way, Collins points out, and therapy is unique to each woman.

All of this takes a toll on your emotional health and relationships. It can be isolating. Collins advises partners to be aware of this fact and says that anything they can do to make their significant other feel less alone is important for the relationship. Especially while going through pelvic floor treatment, it’s important to think of it as a team effort, where both partners play a role in the recovery process. Many women, myself included, just don’t talk about these issues and it can cause you to feel like you’re the only one.

Besides talk therapy, which can be so beneficial, Vestal refers many of her clients to yoga practitioners and teaches them all how to do meditation. “It’s important to recognize that there are so many transitions with taking on a new role of either becoming a mom or dealing with a pain or condition that is often undiagnosed for years. It takes a toll on us.”

One of the most important things you can do is recognize when something isn’t right.

So what else can women do to keep their sex life as normal as possible? Collins suggests to make sure your bladder is empty before intercourse, as pressure can be placed on the bladder and can cause leaking. Make sure you’re staying hydrated by sticking to water and avoiding things that can be irritating on bladder muscles such as caffeine and too much sugar.

She also adds that one of the most important things you can do is recognize when something isn’t right. Pelvic floor issues are common, but it doesn’t mean they’re normal. You don’t have to accept that you’re going to pee when you cough for the rest of your life, or that sex will be painful or embarrassing. Taking steps to improve your health can also involve seeking out a specialist in pelvic floor therapy, something not nearly enough of us are seeking out.

Your obstetrician is there initially to make sure your cervix is closed and your c-section scar is healing, but they aren’t looking at the muscles of your pelvic floor. “Of course we want to make sure our wounds have healed,” Vestal says, “but there’s so much more to it than that, and that’s where a pelvic floor therapist comes in. Even if you’ve crossed your T’s and dotted your I’s at your postpartum check-up, it’s still worthwhile to just get a check in with a pelvic floor therapist.”

So do yourself a favor. Look into seeing a pelvic floor specialist if you’re having problems postpartum. Don’t think that you need to just deal with leaking and pain because you had a baby. Regardless what anyone tells you, you don’t need to “just deal with it.” You owe it to yourself to improve your quality of life, and that includes your sex life.