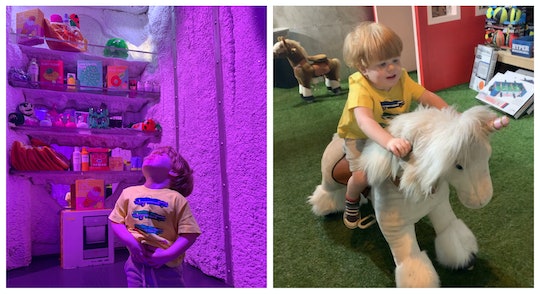 Photos courtesy of the author

What If A Toy Store Didn’t Feel Like A *Shop*?

The greatest cultural cache that exists in parenting circles is knowledge of the Good Toyshops. In each community, the "it" mom can tell you which bookstores have train tables, which toy stores have the most unboxed toys, and which ones are ideal for half-heartedly supervising your tots from a bench with a fist of cold brew in hand. Whiling away the hours in a toyshop isn't a new idea, but it's one that the New York-based "family experience" destination and toyshop "CAMP" has maybe perfected.

Just off Fifth Avenue in Manhattan's Flatiron district, you will find CAMP's "cafeteria," the candy shop of your dreams lined with jars of treats, behind which lies a secret entrance to the real attraction: a themed fun-park-slash-shop. As author Mac Barnett has said, it is all about the secret door. We tried it out on my kids and their cousins, ages 1, 2, 4, and 5, and it's a freaking renaissance.

If I cast my mind back to my teen years, one of the favored group pastimes was heading to Toys ‘R’ Us (RIP) and going nutso in the ride-on toy section until an employee came along and booted us out. It never occurred to me until now, but they must have felt like deranged park rangers having to constantly shoo teenagers out of turreted plastic cubby houses.

I think the whole idea came from that brief scene on the hippity hops in Don’t Tell Mom The Babysitter’s Dead, which along with Big offered a blueprint for what we would all do when we became adults (instantly get a well-paying job and put a trampoline in the living room). Childhood seems to have been truncated since I was small, and I suspect that many Xennial parents, like me, wish they could go back to the free-roaming kid days.

Getting back to CAMP, one of the great attractions of the toyshop is the sense that, outside of maybe opening up your wallet at the checkout, you don’t have to really assist your kid too much. Ours found their way around the supermarket section quite fine thank you very much — I found my daughter busily ringing up her cousin’s groceries with the fervor of a Costco employee who is not in the least bit perturbed by a hidden bar code. I think it actually excited her, stretching that little scanner gun around the bin of sponge baguettes. My 1-year-old nephew grabbed himself a miniature red trolley on the way in and took the eff off. You could see the confidence and freedom in his face at the helm of that cart, like, Finally, I can go the supermarket and get the sh*t that *I* want: bananas, fluffy pizza, fluffy avocados, MAYBE A GIANT HORSE. Last I saw him, he was headed through the cool room with great haste.

Cooking Camp is the second theme the store has put on after "Base Camp," and the old sets will subsequently be rotated out to the Brooklyn store (and then, gods willing, to additional CAMP stores around the country). This particular theme is built around the supply chain, from fields full of (ride-on) horses, to (bouncy) grain silos, to garden beds, a produce truck, the supermarket, a cooler room (a sort of icy disco room featuring Uptown Funk) and kitchen.

In the diner set, there is a slide that rockets kids down a tube into a beanbag stopper like a pleasure signal over a synapse — you can see the kids’ faces register a little “oh sh*t!!” when they realize it’s a fast ride and they LIKE IT. Even for the 1-year-old, it was good solid fun.

We tried one of the “cooking classes,” which seem to have an element of shrinkage built in — my 2-year-old ate all his craft supplies, which were then magically re-upped. We were making Froot Loop sand art in jars, which involved separating the Loops into colors, smashing them in a ziplock, and then pouring them into a bear jar. The model looked fantastic, and my son had a fantastic time considering the objective, but ultimately he ate eveuthing edible and left with an empty jar. The cooking classes are free for members, or can be booked online for nonmembers.

The most popular attraction, per the line of children waiting for a turn when we left, was the produce truck, which you can sit in and “steer” in front of a screen that shows you cruising through forests and over hills. Two-year-olds believe nothing as strongly as their right to drive big rigs along a highway. There is a horn, but my takeaway is you could design an entire experience around “come and sit in trucks” and toddlers would be queueing down the block to get in. I suppose that’s what Digger World is all about. And Burning Man.

There are surprises everywhere, and children's books littered throughout (by the fluffy pizza cushions, you can find Secret Pizza Party), which I liked — it was curation by kid-brain. Start to finish, it was perfectly oriented to kids, down to the random impulse buys located at toddler-eye-level. I'd expect nothing less from a Buzzfeed alum (CAMP was created by the Buzzfeed chief of commerce, and follows the "experiential" branding we have come to expect of millennial companies).

I have to say, I am all for turning our most lucrative ideas into playspaces — New York is fast turning into one big Walgreens-slash-Gap store, while parents wouldn't dare leave their child in a playground unattended. Retail has the ability to offer something in between — somewhere to take our kids, without having to check them for ticks at the end of it.