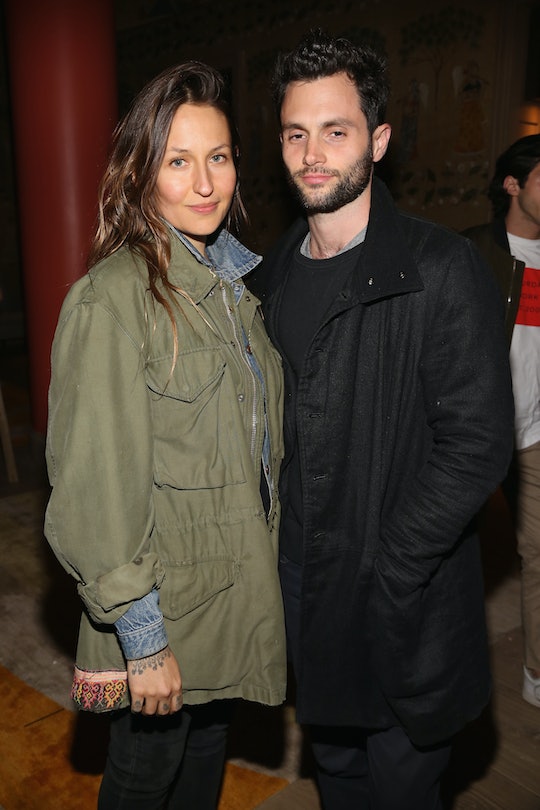 As if he needed another reason for everyone to swoon over him, Penn Badgley smiling at his baby boy in a sweet new photo captured such a tender moment between the new dad and his newborn son.

When they announced the birth of their son, Kirke, who has an 11-year-old son named Cassius Riley from a previous relationship, revealed on Instagram that she was "#40dayspostpartum" back on Sept. 20 with a painting of a heart created with her son's placenta. But beyond that, the couple hadn't shared too many details about their newest addition since his arrival. Until now.

In Kirke's photo, Badgley is wearing a face mask that he had pulled down below his chin as he stares at his little boy who is staring right back at him. The new mom captioned the photo with a heart, which said it all. And the look on both of their faces... priceless.

Kirke's post saw a flurry of congratulations and comments about how content Badgley looked as a dad, including "Penn looks like he is the happiest father in the world," and "Congrats!!! This image just filled me up with so much joy!!!!"

The road to welcoming their new baby had been a difficult one. As Kirke shared on Instagram in February when they revealed their pregnancy news, she suffered through two miscarriages before welcoming their baby boy. "On the road again... pregnancy after loss is whole other thing. After two miscarriages in a row we were ready to call it. I stopped trusting my body and started to accept the fact that I was done. As a birth attendant, I've seen and heard it all. It takes everything I've got to detach lovingly from the losses I've been present for and be in my own experience."

Considering how content Badgley looks as a father to his son, perhaps he'll stop looking all smoldering and broody all the time. Or perhaps not. He still has to work after all.