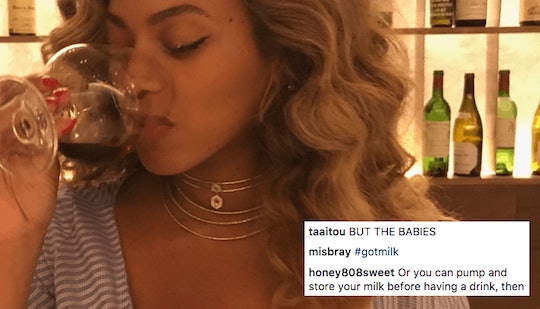 People Are Assuming Beyoncé Is Breastfeeding From These Recent Photos, & It's Not OK

Beyoncé's twins are nearly 2 months old, and by all accounts — especially her Instagram account — the new mama two times over is out and about. But people assume Beyoncé is breastfeeding from some of her recent photos, and there is a whole lot to unpack about how wrong this is, on so many levels. On Saturday, Bey shared a photo of herself to Instagram taking a totally deserved sip of alcohol, backdropped against a wall of very expensive-looking booze. Clad in a killer blue and white striped wrap top, folks had no problem mom-shaming Beyoncé for drinking while breastfeeding, according to HuffPost.

First and foremost, while critics are quick to jump on the "won't someone think of the breastfed babies" train, what if Beyoncé isn't breastfeeding? Where did Queen Bey confirm she's breastfeeding? Oh, she didn't? Right. Not that it's any of our business, anyway. But seriously — the amount of backlash Beyoncé has received over some of her most recent Instagrams showing her going out sans twins, along with the assumptions that she's breastfeeding, has taken mom-shaming to a whole new level of WTF.

In fact, let's just quit dodging the elephant in the room here and get right to the point: People need to get over Bey's breasts.

First, just because a woman shows cleavage does not mean she is automatically reduced to her breasts. This is basically "Objectification of Women 101," according to Ms. Magazine. When Beyoncé won two Grammys earlier this year, her stunning red dress and her abundant cleavage picked up more buzz than the fact that Lemonade is a work of genius and she truly deserved more recognition than she received for it at the awards show.

Fun fact: When women are pregnant, their boobs get bigger — thanks, hormones! This is nothing new, nor should it be a big deal just because she's Beyoncé. They're boobs, people. Get over 'em.

Second, breastfeeding women face unnecessary sexualization. There is nothing sexual about feeding your child, whether it's from a breast, a bottle, or one of those amazing baby food pouches I wish existed when I was a kid. But it's a large part of the reason why many women who breastfeed feel pressured to cover up, as if exposing part of their breasts while feeding their baby is somehow sexual. It's not. It's just mealtime.

Now, if you're a mom, you can understand that whether you breastfed or not, when your milk comes in, you might feel a bit like a dairy farm. Fun fact No. 2: After a woman gives birth, her breasts begin to produce milk. Again, this is nothing new. But it's totally irresponsible to reduce a new mother to just a walking talking food factory for her newborn baby. This is yet another example of objectification that's unique to moms.

As Beyoncé has always shown fans, her identity is more than just a single dimension, and her latest photos and short videos of her nights out only reinforce that not only is it OK for new moms to get out and do "non-mom" things, it's actually a good thing. I can say with 100 percent confidence that Beyoncé has not left Blue Ivy, Sir, and Rumi to fend for themselves home alone while she and JAY-Z have a night out to themselves. The kids are alright, folks. The breastfeeding freakout is not, however — and it's really no one's damn business whether Bey breastfeeds or not.