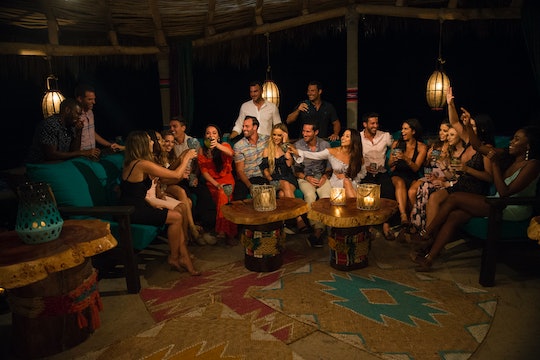 'Bachelor In Paradise' Is Trying To Make 'Mean Girls' Happen

Bachelor in Paradise is, in my opinion, the sloppiest of the Bachelor franchise. Not that The Bachelor and Bachelorette are the classiest of shows, but it's safe to say when all these contestants are stuck on vacation together, it becomes a mess. Like, high school-level mess. Monday night's episode was no exception — and actually proves my point. When Christen arrived in Paradise and asked Matt on a date, the others (especially Jasmine) descended into a gang of Regina Georges. It didn't take long after that for fans to start comparing Bachelor in Paradise to Mean Girls and they're absolutely right to do so.

So, how did Paradise become North Shore High School? It started when Christen showed up in the latest episode. She was immediately given a date card and was evaluating her options. Matt — who's been canoodling with Jasmine thus far — went over to Christen and said that he wasn't taken and is open to this date. Christen chose him, and all hell broke loose. Jasmine became the Regina George of Paradise and decided to call Christen "Scallop Fingers" (from a funny story Alexis told about someone bringing scallops to go in a car — which, granted, is pretty disgusting). That's not all — others in the house took to calling her "Scallop Fingers," too; even her title card said it.

The other contestants purposefully left Christen out of the inside joke. When she came up to Amanda and Sarah and had shrimp in her hands, they started laughing — to the point where Christen had to ask what she was missing. Jasmine went to confront her before the date, and Christen told her the truth: that Matt approached her and said he was available, but Jasmine didn't care. She continued to backtalk her throughout her date with Matt.

When she came back to the resort, Jasmine continued to bully Christen. She jumped on Matt as soon as she saw him and invited him back to her room. Even in confessionals, Jasmine called Christen "Scallop Fingers" and judged her for being a virgin. Basically, Jasmine resented Christen for taking Matt on a date even though Matt initiated their encounter. It's safe to say that the contestants on Paradise don't act the most mature, but this was low even by Paradise standards. Bachelor Nation will see how this high school feud ends once and for all. But in the meantime, BIP needs to stop trying to make bullying happen.