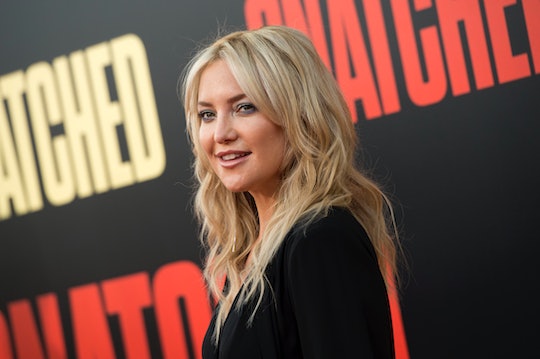 People Are Criticizing Kate Hudson For Calling Her C-Section "Lazy"

Athleisure creator, rom-com lead, and mother-of-two Kate Hudson sported a rainbow striped leotard on the cover of October 2017's issue of Cosmopolitan. Her interview within the magazine's pages was equally bold, and a lot women have found issue with one rather questionable comment the actress made. In the issue's fill-in-the-blank section, Hudson called her C-section lazy, actually listing it as the "laziest thing [she's] ever done." Romper has reached out to Hudson's representation for comment on the backlash, but has not heard back at this time.

Commenters dubbed the thoughts "a tad misguided," as it made moms "ALL KINDS of salty," one tweet read. One user even noted: "For some women, a C-section is life or death," thus calling Hudson's comment a "horrible remark."

On her Instagram post promoting Cosmopolitan's latest issues, her followers also gave insight into their own experience with C-sections, explaining how, for them, there was nothing "lazy" about it. The procedure, recovery time, cost, and circumstances of a C-section notwithstanding, it's likely that Hudson's level of care — given her fame — made her experience especially comfortable when compared to other, less privileged moms.

Aside from the problematic C-section perspective, it is entirely possible that Hudson's comments didn't mean to offend and were likely intended in jest. Whereas they were perceived by many as an attack on the resilience of strong moms and the insistence that C-sections are lazy is probably just ill-informed on Hudson's behalf. Suffice it to say, Hudson's now heard the other side of the aisle loud and clear; for most women, a C-section is no walk in the park

Obviously, Hudson can only speak from her own experience. She reportedly had a C-section two weeks before her baby was due, explaining to the Associated Press back in 2004 that, in her case, the decision had to do with being able to get to the hospital successfully:

I was going to get induced because the baby was so big. Then my hips weren't opening and I wasn't dilating. I was in labor. My contractions were two to five minutes apart and I couldn't feel anything. The doctor said I could go home, but it was such a pain in the butt to get to hospital because we were being stalked by photographers. We went in at midnight and I was like: "I am not going home. I just don't want to do this again. Let's just have a C-section." And so I got drugged up.

Even though she may have dubbed her C-section as a shortcut, Hudson's "laziness" was actually made necessary by her circumstances. Given the supposed stalking by photographers, it was an ordeal in and of itself for Hudson to get the hospital care she required.

Celebrity status has plenty of advantages to it — quality care, five-star accommodations — but there's definitely a downside to being famous and pregnant, too. Seeing as one line interview answers have no context, like this one, Hudson's comment on this birthing method remain insensitive, yes, but perhaps clouded as well.