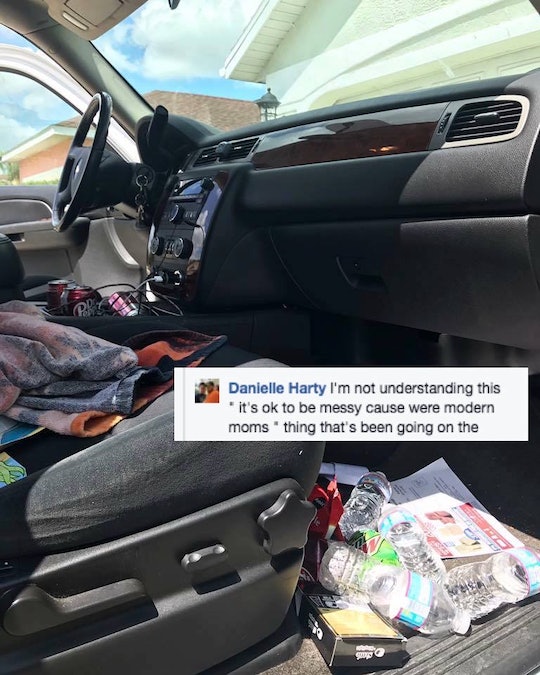 People Are Criticizing This Mom's Post About Her Messy Car, Totally Proving Her Point

I'll admit that I've never been the world's most neat and tidy human, but now that I'm a mom of 4-year-old twins? The truth is that I'm still trying to get a grip on the endless piles of laundry, scattered toys and dirty dishes that seem to appear out of nowhere. As for my car, well, somehow it always ends up looking like I might actually live in it. So when blogger and mom-of-three Nikki Pennington recently gave a Facebook shout-out to "hot mess school moms," it spoke right to my heart. This mom's post about her messy car was so relatable, and totally validating for anyone who feels like they're falling short because their kids are slobs. But a quick glance at the comments section shows that, as much as people appreciated her words, unfortunately not everyone was here for what she had to say.

Pennington is definitely no stranger to opening up online about her experience as a mom and wife, and it's clear that many on social media value and appreciate her perspective. An earlier post she wrote in which she shared her "secret" to a lasting marriage quickly went viral, and earned her major props for her honesty and down-to-earth message. But when it came to opening up about the less-than-perfect side of motherhood that many women experience but often don't talk about, the reaction was mixed: while many people appreciated her willingness to admit something that they often feel like they're supposed to hide, others came out swinging with some pretty harsh mom-judgment.

Pennington first shared the post on her Facebook page, before it was picked up by the popular page, Love What Matters, where it has earned thousands of likes and shares. In it, Pennington shared a photo of her not-so-neat vehicle, complete with half-empty soda cans in the cup holders, and empty wrappers and plastic water bottles on the passenger side floor. In the caption, she spoke directly to all moms whose cars look just like her's — the moms who drop their kids off at school only to have "yesterday morning's breakfast wrapper [roll] out with them," and "the moms that haven't been able to find the floor board of their vehicles since Aug. 1 of last year." Ever found yourself discovering your kid's school paperwork when you're cleaning out your car? Pennington's been there. Still trying to track down just what that weird smell is, and where it's coming from? She's got your back.

Pennington's post might be tongue-in-cheek, but her message about "messy car moms" is an important one. She wrote,

May we know them, may we love them, may we confess we've all been one, may we promise to look the other way when we see one and not mom shame and may we all know we are doing the best we can even when our car looks a hot mess like us.

As someone who knows that her currently-freshly-vacuumed-and-organized car will stay that way until approximately 10 minutes after her kids get inside, that's a mantra I can definitely appreciate. Because honestly, as much as I try to stay on top of my kids' messes — and as much as I try to teach them to stay on top of them, too — it really just feels like a losing battle. And while I think all hot mess moms know deep down that it doesn't really matter in the grand scheme of things, the amount of pressure placed on parents (and mothers in particular) can make it feel like if your car is a disaster, you are somehow totally failing. I mean, if all those women on Instagram can have beautiful, pristine homes, perfectly clean and happy-looking children, and manage to look like they just stepped out of a magazine, then shouldn't I at least be able to not have a car full of cracker crumbs?

But a quick glance through the post's comments, and it's clear that, well, not everyone shares Pennington's compassion for those of us who can't quite seem to maintain a Pinterest-perfect life. While most commenters appreciated her post, others clearly felt compelled to let the world know that their cars aren't messy even though they have kids, and a number of others took issue with what they considered to be a growing trend of women speaking out in defense of hot mess millennial moms. As one commenter wrote,

I'm not understanding this 'it's ok to be messy cause were modern moms' thing that's been going on the past couple years ... I personally don't find it that difficult to keep a home picked up ... and that's with 3 kids 1 year apart and 2 with special needs, my husband working [full time] and me going to college.

Others were more understanding, but still maintained that they are not like that:

I understand why, but this is not me. My car is always clean. I'm one of those, I didn't spend over 20g on this just to trash it, people. But, I have other issues, so we're even. lol!

Another parent noted that messy moms aren't the only ones with happy kids (note: Pennington never said her kids were happier than kids whose mom spent more time and energy cleaning):

Have your messy car, your business, not mine.....BUT, I am so tired of "messy moms" writing posts, making memes, etc., that because their laundry is never folded, toys are littered all over and the sink is full of dirty dishes that "at least their kids are happy" and they have this blissful environment in their home, implying that those who take the time and train their children to not be slobs somehow have Nazi-like homes where everyone is grim and stressed out. They dont want to be judged, yet they judge. Tidiness and happiness are not mutually exclusive. My girls have had roomates, obviously raised in these "uber happy" homes, who cant manage to wash a dish, take out the trash or scrub a toilet, instead leaving it to "someone else" as they go about blissful and not giving a thought as to how their dishes got cleaned or who took the trash out. It cuts both ways.

It's totally understandable that Pennington's post might not make sense to women who are able to juggle their family and personal responsibilities while also maintaining a spotless home. But the point really seems to be that these posts are resonating with so many people because they've tapped into something really important: the desire to move away from the pressure of living up to unfair expectations, and to just embrace and accept the fact that they really are trying their best. And even though not everyone might see it that way, it's still disappointing when that perspective get lost among commenters who think it's just glorifying people being messy.

Pennington tells Romper though that, as far as she is concerned, "when you're a mom, and you're driving your kids around all the time, your car is probably going to get messy." As for the post itself? Pennington said she ultimately wrote it as an act of mom-solidarity. She says, "I knew I wasn't the only one, and I didn’t want others to feel alone.”

Of course, it's never easy to read negative comments about yourself online, but Pennington says she was grateful to those who came out to share their own experience in a truthful way — even if it might not be something everyone can understand or relate to. She says, “I'm thankful for the people who were transparent about their own experience,” and that she hopes it was helpful to any moms who might be struggling.

Being a mother doesn't necessarily mean you have to lower your standards, or that you get to make excuses for your behavior. But it also doesn't mean that you suddenly have to become someone who never struggles or makes mistakes, or that you should become super tidy and neat if you aren't naturally that way simply because someone now calls you "Mom." Parenting, after all, is hard enough without the added pressure of feeling like there's only one way to do it right. And since there are so many more important things about being a mom than what you car or house happens to look like, Pennington's post seems like a really good reminder that it really is OK to let some things slide if you need to.

More Like This
Here Are Parents' Top Trending Searches In 2022, Because Google Really Is Our BFF
Viral Reddit Post Asks If A Toddler Can Watch Cartoons Without Headphones On A Plane
Over 10,000 Sippy Cups & Bottles For Toddlers Recalled Due To Lead Poisoning Hazard
Kim Kardashian Says She's "Shaken" By Balenciaga's Ad Campaign Featuring Children