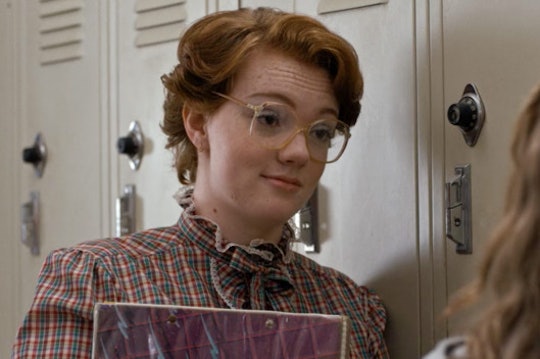 Barb From ‘Stranger Things’ Is Back, & People Are Dying Over Her Emmys Red Carpet Look

Finally, it seems as if the world will see a little justice for Barb from Stranger Things. Ever since Barb (Shannon Purser in real life) was ditched by Nancy and subsequently sucked down into the Upside Down World, fans have been forlorn. A life cut short, and a character we thought we might never see again. Except now, Barb from Stranger Things was at the Emmys, and people were down for her look.

Purser was nominated for an Emmy for her role as Barb on Netflix's Stranger Things; she was the loyal (doomed) best friend of Nancy and wearer of amazing an '80s feathered mullet. The mullet alone was worth a nod, but the fact that Barb has become such a massive fan favorite for what was such a short stint on the show (she appeared on just four of the eight episodes) was a testament to her acting chops. Fans were off-the-charts devastated over Barb's death, and were excited to see her again on the red carpet. But when Purser/Barb showed up for the Emmys, the girl showed up. Looking gorgeous in emerald green and very much alive. Thank the heavens, because now fans can see her for the queen she truly is.

Some were so excited to see her they could barely contain their enthusiasm.

Fans took to Twitter to give Purser a little love for the spot on green color of her dress, which suited her to an absolute tee.

Although one fan noted her look was reminiscent of another fantasy movie...

When I saw that Shannon got nominated, I knew immediately to start looking [for dresses.] She's not the typical sample-size, so I knew I'd have to prepare and speak with some brands to discuss opportunities, especially in the custom realm. I have so much respect for Sachin and Babi's designs, and before I was able to pitch them Shannon, they actually emailed us and offered to make something custom for her.

And can we just say? Job well done to both.

This isn't the first time Purser killed it on the red carpet, guys. Check out her look for the Creative Arts Emmys on Sept. 10.

Obviously slaying all day, every day. While Purser pulled off more than one gorgeous look with the help of her stylist, Langenbrunner noted it isn't always easy in Hollywood for women who aren't a sample size. She told Elle it's actually tough to find a designer who is willing to work with fat or plus-size women:

The challenging part of the fashion industry is that there aren't a lot of brands who make clothing for the average size American woman.

Happily, Purser found her dresses. And she found her justice. In the form of a perfect, gorgeous dress and an Emmy nomination.

And she's also getting justice in the form of... well, all the fans who want justice for her. As she told Deadline, she was pleased to find Barb so well loved.

It was fascinating to me. It still blows me away that she got the kind of response that she did. A lot of it, I think, is timing. I think a lot of people definitely relate to the people who are less than conventional — at least by Hollywood standards — people who are an outcast and awkward, because more often than not, we don’t feel like the cool, popular kid who had everything together in high school. Most of us have been a third wheel or have been stuck at a party we didn’t want to be at. I think there’s definitely this fondness about Barb and her situation because we’ve all been there before.

We have all been there, Barb. Thanks for being there with us.