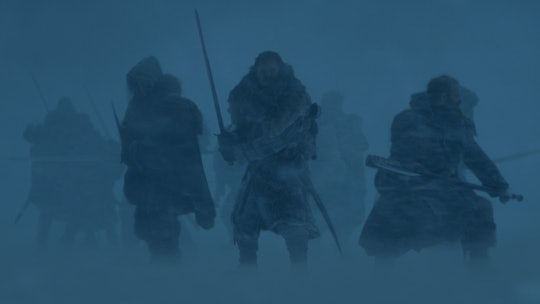 Jon Snow's travels beyond the wall with his own personal crack team of men were like something out of a Jane Austen novel at first: there was a lot of witty banter and casual strolling through nature. It was very nearly pleasant — until a bear attacked. But worse than just any regular hungry bear, it was a zombie bear. And people are freaking out over the wight bear on Game of Thrones.

The bear emerged suddenly in the middle of a snowstorm, when visibility was low and the men had already been walking for hours. Initially it seemed like your normal, run-of-the mill polar bear, but then those sparkling baby blues flashed, and it was revealed that the bear was actually undead. Fans already knew that White Walkers could turn animals (the Night King has ridden horseback on the show), but this made it clear that they can also turn their deadly powers to more predatory game. If the White Walkers could turn a bear, who's to say they couldn't turn something like a dragon too?

The shock of the wight bear's appearance was what really hooked viewers, however, especially coming on so abruptly in the middle of a previously slow episode.

The ability of the men to survive in the icy climate was already being tested by the freezing temperatures and plodding journey, so the burst of activity was very much needed. Luckily, those fighting skills they'd spent seasons honing prevailed with minimal injury to the main characters — in that first encounter, anyway. Thoros of Myr, the priest of R'hllor who had brought Beric Dondarrion back from the dead six times, did end up with a nasty bear bite. Unfortunately he couldn't work that same life-saving magic on himself, and he succumbed to his injuries later on.

The wight bear appeared to meet a fiery demise; in the end, it was no match for the makeshift group of soldiers taking it on. But ultimately the bear was simply preparing its audience for greater carnage to come. Its arrival was the first hint that the Night King's army would be showing up later on to attack in much greater numbers. And while that first victory against a single foe didn't go badly, there would be bigger losses in the group's second run-in with the dead.

It was good that fans got the first shriek out of their systems when the wight bear emerged, because there may be even bigger things in store later on — like a wight dragon, for instance.