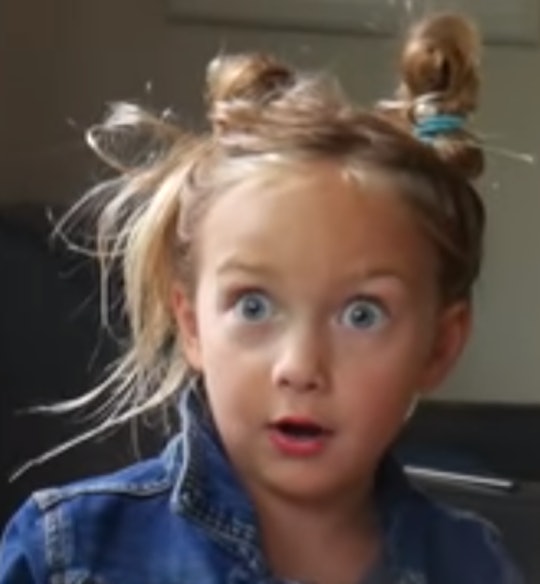 This Little Girl's Viral Videos Are Everything

Before you delve into the brilliant, complicated mind of Ava Ryan, do me a favor: Go get yourself a tea/coffee/wine depending on the time of day or your inclination. And then strap in for a wild ride. Because there's a reason people are freaking out over a little girl's viral videos. She's so freaking hilarious, so on point in everything she says, I either need to adopt her or become her best friend immediately.

Ava and her mom, Katie Ryan (who deserves about a million high fives for raising the funniest, most observant kid on the planet), have been sharing videos on Facebook and YouTube ever since Ava was 18 months old. Back then her routine was pretty much just being herself. One of my personal favorites, Ava's classic "I smell like beef" video from when she was just a toddler, was a real portent of what was to come. As mom Katie Ryan told ABC News, "When she started talking, that's when she was able to verbalize her sense of humor." So Katie and her husband, Daniel Ryan, decided to roll with it.

Katie Ryan became her daughter's videographer, and started a series of Vines (remember Vines, guys?). Praise be. Because these days, the 7-year-old internet sensation has a cast of characters she rolls out on a regular basis for her fans, this time in full-length videos. My favorite? Charlene the hot mess. Who we will all surely recognize as either one of our friends, or ourselves.

According to an interview Ava did with People, Charlene is based on a woman she saw walking down the street who she thought looked like "a hot mess." And so, Charlene was born, the woman stuck inside a 7-year-old whose "life is a series of awkward selfies," who prefers to stay home listening to "Despacito" by herself (because "humans..."), and tends to show up eight hours late for brunch. Because she doesn't really "believe in being on time."

When Ava isn't talking some hard truths as Charlene, she's making us laugh on the regular. Like the time she screamed at joggers passing by her house, "You're winning at life!"

Naturally, Ava's videos are completely taking over the internet. Everyone is in love with her hilarious take on life.

And considering how self-actualized she already is as a 7 year old, I can't imagine fame will change her much. She'll still be Charlene, the girl who takes sneezing selfies and spends all of her time following dogs on social media. And we'll all still be watching, a little worried that Charlene might be just a bit too on the nose for all the hot messes out there.

More Like This
Little Leaguer Comforts Pitcher Who Accidentally Hit Him In The Head In Viral Video
This Job Listing For A Nanny Has Gone Viral For Being Completely Unreasonable
Little Miss Memes That Speak To Our Mom Souls...
When Do The Benefits Of Breastfeeding Diminish? Experts Weigh In