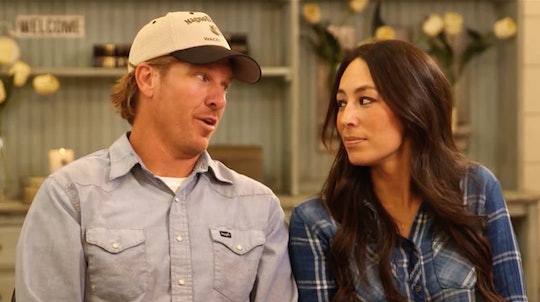 It takes a lot for an expectant parent to share their news with the rest of the world. While one would expect nothing but words of encouragement and happiness for the parents-to-be, they're also unfortunately opening themselves up to criticism at the same time. After announcing they were leaving their HGTV show after five seasons, home renovating idols, Chip and Joanna Gaines, received a lot of comments from sad fans, wishing they would keep the show on. And now that they've announced the exciting news that they're expecting their fifth child in the new year, people are making some really cruel comments about Chip and Joanna Gaines' baby news and it is all just so ridiculous. Sure, they're celebrities, but can't people just let them enjoy this moment?

On Tuesday, Chip and Joanna first announced the news of their fifth pregnancy through Chip's Instagram account where he shared the sweetest photo of him and his wife with matching pregnancy "bumps" (except Chip was expecting a food baby, of course). And fans were mostly positive about this incredibly exciting news.

But, when people are anonymous online, they feel like they can say or do anything without having to face repercussions for their words — which is primarily true. However, it seems a little foolish for people to leave mean comments on such exciting news for the couple who always talked about wanting to have another kid (they are parents to four children under the age of 12, according to People). But some people are doing just that — leaving mean comments on Joanna's super sweet ultrasound video that she shared to her Facebook page on Wednesday, according to Us Weekly.

These commenters did not hold back on their feelings about the news. One commenter wrote on Us Weekly's Facebook post about the news. "I like them OK but enough with the kids already. Their own children begged them not to have any more children on a previous episode already+overpopulation..."

Some people weren't happy with the fact that she is having a baby at the age of 39 years old. "She's too old, it's not fair to the child," another commenter added on People's Facebook page. "My mother had me at 42 and did not have time for me growing up, she was too busy with other family members."

Over on Joanna's Facebook page, people were not happy with the fact that she shared her ultrasound with her millions of followers. "Please don't take video at Ultrasound's and post," one commenter wrote. "You never know if the video contains abnormalities or not."

People on Twitter were just as critical and mean about Chip and Joanna's news.

But aside from just this small portion of hurtful comments (and confusion), the majority of fans could not stop freaking out over the couple's news when Chip took to Instagram and made the announcement on Tuesday night (and many of those fans are probably still freaking out, like, right now).

But just because some people are leaving some hurtful comments about the news doesn't mean that they won't come around to it, eventually. Chip himself was reluctant to have another kid as of six months ago, according to People, after Joanna revealed to People that Chip thought he and Joanna were "done" having kids. But, as their announcement shows, Chip quickly turned his mind around on that.

Who knows? Maybe these naysayers will be OK with Chip and Joanna's newest pregnancy or her showing off her ultrasound scan after a while. They have the rest of the new year (and the duration of her pregnancy) to join the rest of the Fixer Upper fans and follow suit.