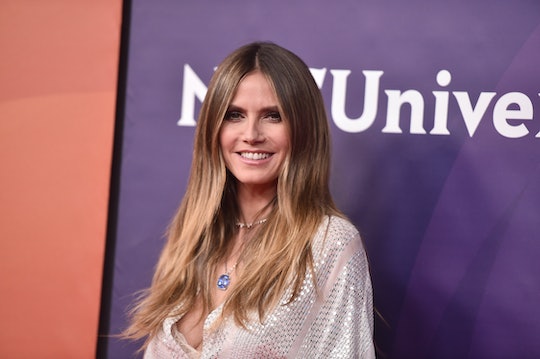 Mom-Shamers Are Attacking Heidi Klum For A Partially Topless Photo

Heidi Klum's runway days may be behind her, but the 44-year-old mom of four is still every inch the supermodel — as evidenced by her latest, makeup-free, Instagram post. On Thursday, the Project Runway star shared a makeup-free snap of herself "catching the last sun-rays of the day," and in it, Klum is wrapped up in a towel, with a fair bit of cleavage on display. Though there's nothing particularly scandalous about the pic — it's basically the same amount of nudity you'd see in a lingerie or swimsuit ad — people are mom-shaming Heidi Klum for a partially topless photo, according to Yahoo!, and honestly, the social media commentary is just beyond eye-roll inducing.

Although it's not entirely surprising that Klum's photo raised eyebrows (that seems to happen whenever a celeb shows even a little bit of skin on social media), the reaction to the pic seemed to fall into one of three categories: users either felt the photo gave them the right to leave a creepy comment about Klum's body, they thought she deserved to be criticized for seeking attention, or they believed that she should feel ashamed for daring to show some skin when (gasp) she's also a mother. The reality, of course, is that Klum looked amazing in the pic, and also that she has the right to do whatever she wants with her body regardless of whether she looks amazing or not. Yet the mom-shaming she received just further proves why the bizarre expectation that motherhood invalidates a woman's sexuality needs to die immediately.

A number of users did at least commend Klum for the pic, leaving comments that were complimentary instead of totally judgmental. But as is usually the case, there were plenty of critical comments, too. Many of them were similar to those left by the users who told Klum to "put those away," to "tone it down a bit," or "put on some clothes," and there was one user who thought they'd chime into ask, "why do beautiful strong women believe they need to show more than their beautiful smile?" (maybe it's none of your business?). But others couldn't seem to get over the fact that Klum's kids might see the photo, and presumably be embarrassed and traumatized that their mother has breasts.

One user wrote, "omg cover up!" coupled with the oh-so-pleasant hashtag #momwhore (seriously?), while a number of other users felt the need to ask if Klum's children followed her on Instagram (clearly children should never see tiny glimpses of their moms' boobs, even though they were literally their first-ever food source). And one particularly judgmental commenter suggested that Klum's picture was proof that she was neglecting her children:

Putting the larger conversation about women's bodies aside for a minute, it's surprising that anyone could be shocked or surprised to see Heidi Klum still looking so confident and gorgeous — or that she would be showing off some skin. She is someone who has made a literal fortune off of her beauty, and part of her super successful modelling career included posing in revealing lingerie for Victoria's Secret, and in skimpy bikinis for Sports Illustrated. In fact, in an interview with Ocean Drive magazine in 2016, German-born Klum said she is totally comfortable in the nude — and not just because it's been part of her career. She said,

I grew up going to nude beaches with my parents, so I’m a nudist. I have no problems with nudity at all. I’m very free. When I go to the beach, it’s in a very remote place where there are not a lot of people, and I like to go topless ... I don’t think that’s vulgar. I feel comfortable and don’t care if someone sees my nipples necessarily — it’s okay to see the nipple!

Clearly not everyone sees it the same way as Klum though, and, to be fair, even if she didn't have kids, there would surely still be plenty of people who would take her to task for daring to show off her body. But it's certainly no secret that, while female nudity in general is always ripe for backlash and judgment (especially if you aren't as naturally perfect-looking as Klum), it's seen as particularly unacceptable if you've given birth (Just ask Kim Kardashian, mother of three, who regularly gets grilled for posing nude on Instagram).

Unfortunately, the internet has long been a breeding ground for trolls with hateful opinions, and being a mother in the digital age is a challenge, famous or not, dressed or undressed. But by now, it should at least be understood that being a mom doesn't have anything to do with a woman's sexuality — whether that means posing semi-topless on social media, or breastfeeding in public. And if you can't find a way to agree with that, then perhaps it might be best to not say anything at all.