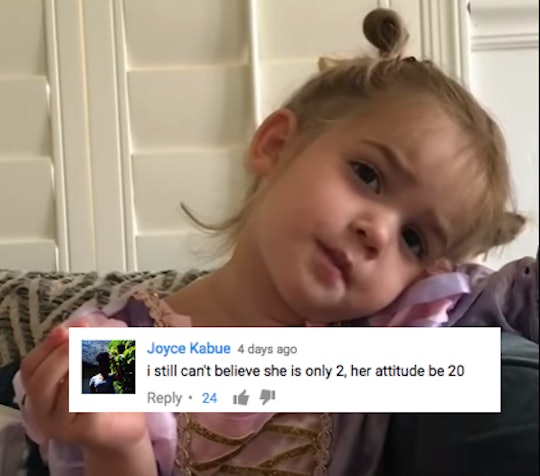 Nobody is as honest as a toddler, this we know for sure. If you're ever wondering how you should feel about your new haircut/jeans/boyfriend, just ask a toddler what they think. They'll be happy to tell you, whether you like the answer or not. Toddlers tend to be particularly honest if the subject in question directly affects them and their day. Take Mila, who is well known for her YouTube video rants on various topics. Most recently, Mila talked about her first day of preschool in an incredible viral video. She's not sugarcoating it, folks, trust me.

According to her epic rant, 2-year-old Mila from Arizona was not happy about her first day at preschool. It seems that the day before, her mom "had some news for me; she signed me up for preschool," (insert massive eye-roll from Mila here). To be fair, she thought she'd made it clear to her mom that she wanted to go to law school. So you understand what a come down that must have been for her. Especially when her mother explained she would not be going to law school because,

As if the disappointment of not going to law school wasn't bad enough... Mila had to go to a preschool where, according to her,

The teacher is shady, kids are insane.

Her expectations for the day were not high.

Things went from bad to worse, according to Mila. The kids were "Throwing staplers, pooping everywhere," and then there was The Incident. Young Dave, a fellow preschool student, was apparently admonished for peeing on his friend. And he "got triggered." He chased the teacher with scissors, and Mila finally had to take matters into her own hands. She told everyone it was time for their nap. Problem solved, and now she's clearly ready for law school.

Mila has starred in several (hilarious) viral video rants on YouTube, filmed by her mom, Katie Stauffer. Mila's outrage at the most innocuous things was an instant success on social media; Stauffer's Instagram followers jumped from 100,000 to more than one million in a matter of days after she first posted a video of Mila ranting. While Stauffer, who is the mother of five, told Fox 10 in June that she does tell Mila what to say sometimes, it still ends up being funny because of Mila's deadpan delivery.

She is, she's a little sassy and she loves to act. That's why we kept doing them because she likes to do them and it's just funny to see. Even if we're telling her what to say, it's funny to see her, a two-year-old have that emotion.

Like this video where she lost it over a boy kicking her seat at a movie theater. Because honestly, it is really annoying.

One of Mila's rants about a woman who was walking too slow grabbed the attention of Ellen DeGeneres, the taste maker for funny kids around the globe.

So yes, all toddlers are pretty honest little people. But Mila Stauffer? She might take the cake as the most honest of them all. As Mila herself would say, I'm shook.