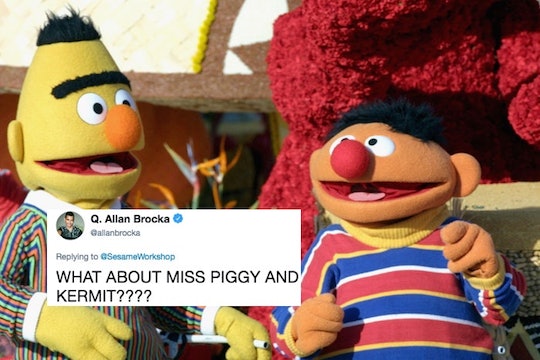 It's sort of a weird news day when Sesame Street is top of mind for everyone... but there you have it. After a writer seemingly confirmed the sexual orientation of two central characters on Sesame Street on Tuesday, people are pretty pissed that Sesame Workshop denied Bert and Ernie are gay in a statement soon afterwards. Romper's request for further comment was not immediately returned.

Update: Sesame Workshop shared the following statement with Romper after its initial statement shared on Twitter on Tuesday.

Sesame Street has always stood for inclusion and acceptance. It's a place where people of all cultures and backgrounds are welcome. Bert and Ernie were created to be best friends, and to teach young children that people can get along with those who are very different from themselves.

Earlier: Here's how it all started; former Sesame Street writer Mark Saltzman recently spoke to Queerty magazine about the long-running speculation that Bert and Ernie might be gay. You all know Bert and Ernie; the best buds who are sort of like Felix and Oscar from The Odd Couple, one neat and crabby where the other is cheerful and messy. According to Saltzman (who helped write for the characters), as he told Queerty, there was a reason the speculation about the two wouldn't die down; because that's how he was writing them.

Saltzman explained to Queerty that, perhaps unintentionally, he had been basing the characters on his relationship with editor Arnold Glassman all along, "I was already with Arnie when I came to Sesame Street. So I don't think I'd know how else to write them, but as a loving couple. I wrote sketches… Arnie's OCD would create friction with how chaotic I was. And that's the Bert & Ernie dynamic."

Saltzman continued to explain that he didn't overtly check in with the head writer, it was simply a dynamic that felt familiar to him as someone involved in a same-sex relationship, according to E! News. "I will say that I would never have said to the head writer, 'oh, I'm writing this, this is my partner and me,'" he told the publication.

You might think that this wouldn't be that big of a deal at this stage in time, right? After years of people sort of assuming that Bert and Ernie could possibly be gay, who would be concerned about it being seemingly confirmed in 2018?

Apparently, it seems that Sesame Workshop didn't want their sexual orientation to be addressed. The company shared a statement about Bert and Ernie, explaining that they are not gay, just best buds. The statement read:

As we have always said, Bert and Ernie are best friends. They were created to teach preschoolers that people can be good friends with those who are very different from themselves. Even though they are identified as male characters and possess many human traits and characteristics (as most Sesame Street Muppets do), they remain puppets, and do not have a sexual orientation.

There were some fans who weren't impressed that Sesame Workshop delivered a statement on the subject.

It's clear that many people weren't happy with Sesame Workshop's denial on Tuesday, especially when they pulled out the old "puppets do not have a sexual orientation" excuse. Many fans referenced Miss Piggy and Kermit the Frog, characters also created by Frank Oz.

The definitive answer of whether or not Bert and Ernie might be gay came from creator Frank Oz, who tweeted:

It seems Mr. Mark Saltzman was asked if Bert & Ernie are gay. It's fine that he feels they are. They're not, of course. But why that question? Does it really matter? Why the need to define people as only gay? There's much more to a human being than just straightness or gayness.

At the end of the day, I think Bert and Ernie represent a happy relationship. They represent two people who care about each other, who are loyal and kind and good and committed. It was a positive model for many relationships out there, I'm sure, and I hope it continues to be.