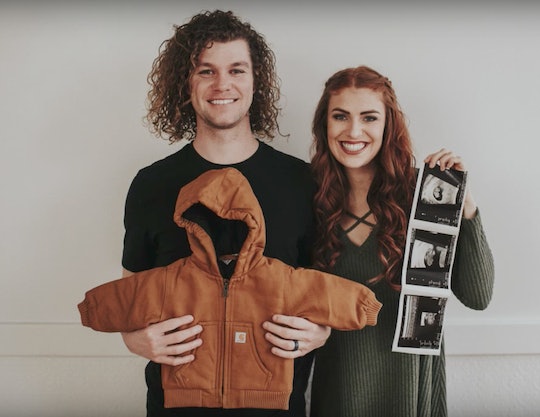 People Are Mad At Audrey Roloff For The Absolute Dumbest Reason

Little People, Big World star Audrey Roloff is expecting her first child literally any day now, and she's been sharing her excitement about that with fans on social media all throughout her pregnancy. Recently, that included posting a belly-baring photo on Facebook, which, honestly, is a pretty typical move for celebrities, reality TV stars, and totally non-famous expectant moms alike. Why shouldn't they celebrate and show off their (in Roloff's case, very) pregnant bodies? Still, people are shaming Roloff for sharing a photo of her bump in the comments. The indignant, pearl-clutching outrage over the harmless photo is pretty absurd — so, luckily, she had the best response to the criticism ever.

It all started when Roloff, who shares the soon-to-be baby girl with Jeremy Roloff, posted a casual mirror snap her herself in sweatpants and a tank top hitched above her protruding belly. "Does it get any lower?!?" the 25-year-old captioned the pic, using the hashtag "#almost39weeks" to indicate that she's definitely in the home stretch of her pregnancy.

Unfortunately, some commenters — who are free to simply not look at Roloff's page if they don't like its content — took issue with the snap. Apparently, a pregnant woman's belly is more than a little offensive for some.

Here's a sampling of what they had to say:

I love this family but I think it is a disgrace to show your body to all the viewers.my openion. It should be for your husbands eyes only

You are not the first woman or little girl to have a baby!!!

Let's wrap it up with this gem:

I am so sick of you showing your belly. We all know you are with child. It would be nice to see a picture of you some time not your belly or your hand underneath your belly to shoew that you are pregnant.

You get the idea.

All the hate is totally ridiculous. If there are moms out there (and I'm sure there are) who don't want to post photos of their pregnant bellies or don't feel comfortable doing so, then they absolutely should keep that part of their pregnancies private. But for someone like Roloff, who clearly has no problem with letting the world see her changing body, more power to her!

Luckily, Roloff's response to the criticism could not have been more classy or pointed. Instead of responding directly to the negative comments unnecessarily clogging up her comments, she simply changed her profile picture — which had been a professional photo of her, wearing a dress, sitting with Jeremy — to one that also shows off her stomach, except this time, she's sitting cross-legged on a bed in a black sports bra. And she made the switch on the same day that the unhappy Facebook users crept into her comments, according to PopCulture.com.

Just like people shame women for showing their bodies way too much, they also love to mom-shame. So, it's great to see that Roloff won't be taking that crap from anyone when her daughter finally gets here, either.