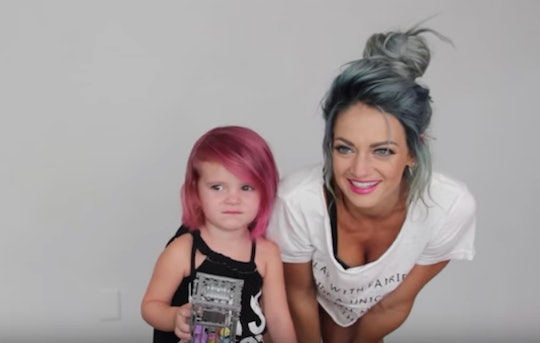 People Are Shaming This Mom For Dyeing Her Kid’s Hair, & It's Really Annoying

Back in June 2017, brand ambassador and mom Charity Grace LeBlanc incited a major controversy on social media when she shared a video tutorial about dyeing her young daughter's hair. Many of LeBlanc's critics slammed her for supposedly putting her adorable child in harm's way (potential hair loss, dangerous chemicals, etc.), despite the fact that she used semipermanent dye that's safe for kids, according to POPSUGAR. And to make matters even more ridiculous, people are *still* shaming this mom for dyeing her kid's hair. If you've followed LeBlanc's story from the jump, there's a good chance the reason why will make your blood boil.

On Sunday, LeBlanc took to Instagram to share a sweet photo of her young daughter, 2-year-old Felicity. In the snap, Felicity strikes an impressive tree pose (way to go, girl) while also giving a fierce look to the camera. At first glance, it's a fairly typical photo any parent might share to social media, with the exception of a few things, namely Felicity's pink dyed hair and eyebrows.

But for LeBlanc, Felicity's bright pink hair is a non-event that requires no fanfare. "Just a magical baby yogi and her fuzzy baby bunny. #namaste," she casually captioned the shot, according to Instagram.

If you click on Arctic Fox Hair Color's Instagram page, you'll quickly note that the company is "Vegan + Cruelty-Free" and doesn't use "harsh chemicals."

"We spent two years of research and development to formulate a color that is highly pigmented, bleeds less, and won't stain your sinks," the company's website goes on to state. "Arctic Fox is long lasting semi-permanent color that is easy to work with, conditioning and smells great."

Although this info about the dye used on Felicity's hair is readily available, many critics took to the post's comments section to blast LeBlanc's parenting.

"I think it wrong to die [sic] such a young child hair including her eye brows," one person wrote. "It is damaging to the hair and what happens when natural colored roots to grow in?"

Another follower chimed in: "I think that it is bad for her."

One accusatory person commented on the video at the time, according to HuffPost:

Are you crazy? You did this for likes!!!

Of course, the criticism of both the video and picture of Felicity is totally misguided. Not only did LeBlanc make sure the dye was gentle and safe, but she also asked for Felicity's consent before she made the change.

In fact, LeBlanc asked Felicity a few times if she was "sure" about rocking pink hair. Each time LeBlanc questioned Felicity, she excitedly responded "yes," according to YouTube.

And if Felicity ended up hating the pink, it would wash eventually wash out. No biggie, right? Luckily for Felicity, however, she obviously loves the pink shade. If Felicity didn't, she wouldn't have let LeBlanc dye it multiple times.

But most importantly of all, it's no one's business as to how LeBlanc lets her daughter express herself. Critiquing a parent for dyeing a kid's hair is no different from hating on a parent for allowing their child to wear makeup, for instance. It's extremely unfortunate that some people feel the need to shame self-expression when kids already face so much pressure to "fit in."

The good news is LeBlanc isn't deterred by her haters. LeBlanc told HuffPost in July 2017:

I think people just like to talk about something that is different from the norm. It creates discussion, and there is nothing wrong with that. Some people were appalled, and some absolutely loved it. The most important thing is that it’s safe, and I love her immensely ... anyone who thinks otherwise just doesn’t know the facts.

So, yeah. Felicity continues to sport her awesome pink hair, and somehow, the world is still spinning.