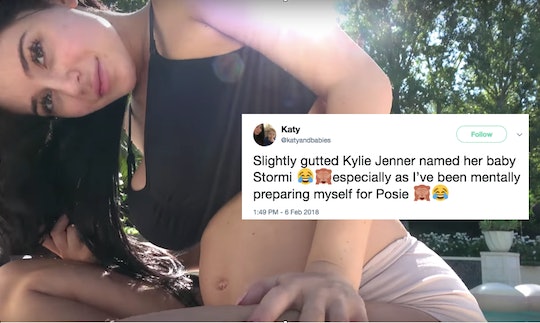 Now that Kylie Jenner's baby has been born, wouldn't you think her fans would rest easy for a minute? Think to themselves, it's finally happened so now let's all get back to our regularly scheduled programming? Think again. After the Life of Kylie star gave birth to a healthy baby girl on Feb. 1, she released a statement explaining why she didn't share her pregnancy with fans, and then she shared a mini-documentary. But it still wasn't enough. She didn't release the baby's name, and conspiracy theories lit up social media. Well now she has shared the name, and fans are upset Kylie Jenner didn't name her baby Posie. Because everyone wants to be right about something, I guess.

After speculating not just about Kylie's baby's name but also her sheer existence for months, it turns out everyone was wrong. Despite crime scene investigation-level deductions and butterfly theories and staying focused on every hint that came their way, the fans got it wrong. Dead wrong. The baby's name is not Posie; it's Stormi. And fans are super sad their theories proved incorrect after all of that hard work.

One fan commented on her Instagram photo, "Change the name to Posey pls😢." Some other fans noted that the nation really came together to work out this theory, and it's a bit of a depressing plot twist that their guesses were way off.

The Lip Kit mogul took to Instagram on Tuesday to share the name of her precious wee girl (not to mention a very lovely pic of her cherub-cheeked little one clutching her finger) with her more than 100 million followers. She captioned the photo "stormi," but I'm going to go out on a limb here and assume she'll be capitalizing her daughter's first name in the future. Kylie doesn't strike me as an e.e. cummings-type.

Sadly, her happy news inadvertently quelled the dreams of some self-assured conspiracy theorists who had been holding out for the name Posie for several reasons:

All of these hints appeared to be clear signs that Kylie had named her daughter Posie. People seemed happy about this, and perhaps even more than happy — proud of themselves for having solved the puzzle before the big reveal.

On one level, I totally get it. Cracking the code felt satisfying after months of being left in the dark so Kylie could move through her pregnancy in peace. Her fans obviously missed her, and wanted to be a part of her life again.

But here's the thing: she gets to pick whatever name she wants for her baby. Even if her baby's name is weather-based and might not be the number one choice for her followers. The name Stormi already seems to be bringing up some feelings for people on the internet.

Sure, Stormi isn't as common as Susan or Jennifer or even Kylie, but since when has anyone in the KarJenner clan wanted to go the "common" route? After baby names like Dream, Chicago/Chi (pronounced "Shy"), Reign, North, and Saint... what did people actually expect? And just because the girl likes butterflies, doesn't mean she's going to name her baby after them. Stormi it is, and we all might as well get used to it.