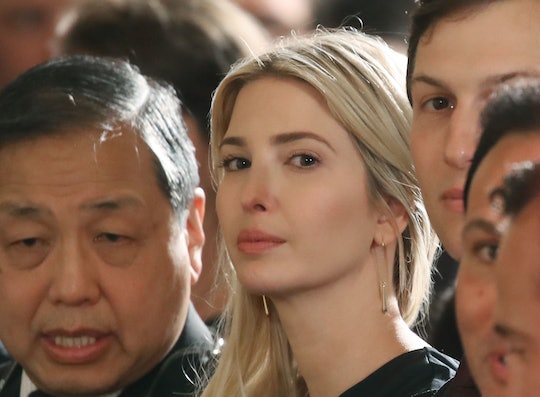 "Why I Disagree With My Dad" Tweets Call Out Ivanka

Ivanka Trump doesn't always agree with her dad, President Donald Trump. She wants people to know this and wants to turn the tide of marketing back in her favor as it was during the halcyon days of the Republican National Convention, when even Trump detractors could be heard muttering, Well, at least Ivanka seems like a nice person. Whether she likes it or not, it's possible even the best branding specialist out there might not be able to turn things around. After her recent appearance on the cover of Us Weekly, people have called Ivanka Trump out for not really disagreeing with her dad.

Much has been made of Ivanka Trump's alleged influence over her father; the mother of three took a leave of absence from her own business in favor of an unpaid "special assistant" position advising the president. Just how much influence she manages to wield with her father is up for debate. While Ivanka was widely credited with advising her father on issues like his campaign platform about paid maternity benefits, he has since gone on to nominate a Supreme Court justice (Neil Gorsuch) who he feels will "overturn Roe v. Wade," according to The Washington Post. He also revoked federal pay equity protections put in place during the Obama era, and has made it clear he would like to defund Planned Parenthood.

And yet, there is a picture of Ivanka Trump on the cover of a magazine with the caption "Why I Disagree With My Dad."

Apparently, the internet has some feelings about whether Ivanka is doing her level best to disagree with her dad.

An unnamed source was quoted in the article about Ivanka Trump, claiming that she and husband, White House adviser Jared Kushner, attempt to offer a positive influence over the president in the face of difficult decisions. According to The Hill, the source said:

Sometimes she and Jared are a big influence on Donald and sometimes he takes other opinions into account and does something they disagree with. They win some and they lose some.

The couple allegedly attempted to talk Trump out of leaving the Paris Agreement, but to no avail. And Twitter has taken their failure in this situation and others (LGBTQ rights, Syrian refugees) as a failure to act in general against the president. Using "Why I Disagree With My Dad" as a frame of reference, social media users have pointed to other times when it would have been wise to disagree a little more stridently with their father.

Ivanka Trump's struggle is one of perception — she seems to want people to believe she is a strong-minded feminist who isn't willing to put up with any nonsense from her power-hungry father.

Unfortunately for her, few people appear to be buying into that narrative any longer and are looking for Ivanka to do more than talk the talk.