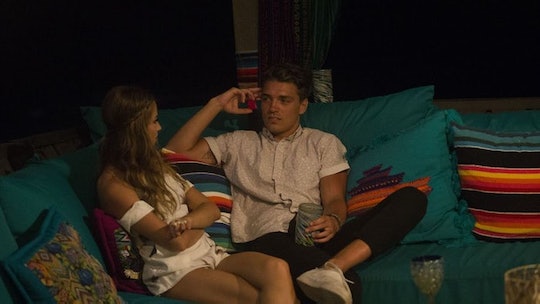 Fans Aren't Thrilled With Dean On 'Bachelor In Paradise'

Dean was an easy favorite on Rachel's season of The Bachelorette, but it only took a few episodes of Bachelor in Paradise for some fans to completely flip their opinions of the contestant. In fact, people really hate Dean on Bachelor in Paradise this season and he's the only one to blame for it. His relationship with Kristina seemed like the real deal, especially when they came back from the production shutdown with the news that they'd spent a lot of time together outside of paradise.

But then Danielle L. arrived and unwittingly stirred up a lot of drama between the new couple. Suddenly, Dean and Kristina were in a love triangle with Danielle L. and Dean began a back and forth thing of playing the two women. I mean to be fair, he didn't really hide anything, but he also no doubt knew how Kristina felt about him.

He even said on Tuesday's episode of Bachelor in Paradise that he knew Danielle L. would never be as into him as Kristina was. But even so, he continued to essentially date both women, while continuously going back to Kristina with assurances of his feelings for her. Because of that, fans have not been happy with Dean on Bachelor in Paradise and rightfully so.

There's nothing in the Bachelor in Paradise handbook that says you can't fall for two different people. Well, technically, there is no handbook, but there probably should be one. However, in Dean's case, the way he went about it wasn't really the right way to do it.

At one point on Bachelor in Paradise, Dean even said that Kristina might be the right choice, but Danielle L. would be the "more exciting" option for him and that alone speaks volumes to the kind of guy he is. In other words, not necessarily the sweet and pure angel fans fell for on The Bachelorette.

Since the season isn't over quite yet, there's still the possibility that Dean will redeem himself and make things right with Kristina somehow. Then again, the way he acted with Kristina, almost toying with her emotions and definitely confusing her with his actions, could have went a different way. Instead, Dean could have made a decision to call it quits with one of the women and solve the issue right then and there.

When the season began, Dean and Kristina were a pretty solid couple, so seeing the love triangle develop and the way Dean handled it was disappointing to say the least. And there are plenty of Bachelor Nation fans who aren't happy with him because of it.