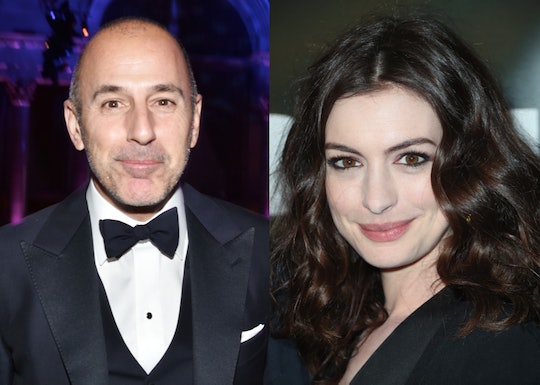 NBC fired The TODAY Show's Matt Lauer after his more than 20 years as co-host of the talk show. He was reportedly fired due to a detailed complaint lodged against him by a colleague at the station. As social media (and celebrities) continue to weigh in on Lauer's removal from the show, there appears to be one particular interview that people think should have sounded the alarm, or that at least just felt a little off. According to Twitter, people think Lauer's interview with Anne Hathaway was all kinds of weird.

Romper has reached out to reps for both Anne Hathaway and Matt Lauer and is awaiting their responses.

Hathaway was promoting her film, Les Miserables, back in 2012 when she sat down for an interview with Lauer. Not long before the young actress was about to hit the interview circuit, paparazzi took photos of her having a bit of a wardrobe malfunction as she was getting out of her car. Essentially, someone snapped an up-skirt pic of her. When Hathaway sat down with Lauer to discuss her movie, he seemed to mock her for being victimized by having personal photos of her body shared without her permission. When Lauer greeted her, he said, "Good to see you... seen a lot of you lately."

And Hathaway, clearly uncomfortable, replies, "Sorry about that." As though she has anything to apologize for.

I'd be happy to stay home, but the film.

Lauer wouldn't let it drop, though, and proceeded to ask her what "lesson" she learned from the unfortunate event, other than to "keep smiling, which you always do." Framing the question as though she had somehow made a mistake and needed to learn from it.

Hathaway's response was sad and perfect, but made sadder still by the fact that she was expected to talk about "learning her lesson" when someone else shared images of her body without her permission, according to Vox:

It was obviously an unfortunate incident. It kind of made me sad on two accounts. One was that I was very sad that when we live in an age where someone takes a picture of another person in a vulnerable moment, and rather than delete it and do the decent thing, sells it. And I’m sorry that we live in a culture that commodifies the sexuality of unwilling participants. Which brings us back to Les Mis.

In the wake of Lauer's recent firing, it seems Twitter users might have been waiting for the news to drop based on what many have called a creepy interview with Hathaway and his remarkably obtuse response to her victimization.

In fact, 2012 was the year the tide of public favor seemed to turn against Lauer when it came to his treatment of women. It was widely reported that he was the driving force behind co-host Ann Curry's removal from the couch on The TODAY Show simply because he didn't like her, according to TIME. Curry's tearful departure and chilly response to Lauer did not go unnoticed at the time, and lost the show many viewers who sided with Curry. Then the interview with Hathaway happened... and yet, there Lauer sat. For another five years.

But that was until Wednesday, when NBC News chairman Andrew Lack released a memo explaining that Lauer had been fired due to sexual misconduct allegations by a colleague, according to Refinery29, though that wasn't the only reason:

While it is the first complaint about his behavior in the over 20 years he’s been at NBC News, we were also presented with reason to believe this may not have been an isolated incident.

It's great that NBC News is being proactive, but Twitter can't help but wonder... where was all of this outrage when Lauer seemed to overtly shame Anne Hathaway during an interview five years ago? Regardless, the move by NBC seems like a step forward in the fight to condemn sexual harassment in the workplace.