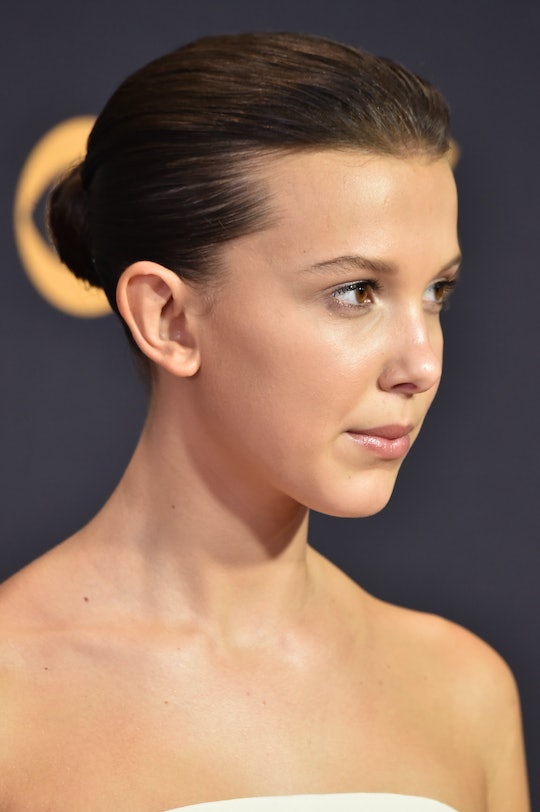 Look, there are very few absolutely pure things in this world. Snow cones, Beyoncé, and chocolate come to mind, but there's someone else who belongs in the ranks. She stole America's heart in her role in Stranger Things, and now, people think Millie Bobby Brown's Emmys dress is an "eleven," and the love doesn't stop there.

Seriously, the love that the internet has for Brown cannot be overstated. Her role as Eleven in Netflix's smash hit, Stranger Things, proved to be entirely charming, despite the fact that Brown spoke very little as Eleven. Yeah, she's that good. And she's only 13 years old. Brown exhibits grace and dignity and a maturity that's way beyond her years. And while, of course, it's really not that important what anyone wears, Brown's dress at the Emmys was seriously gorgeous. And Twitter definitely agreed.

It can't be easy to be a kid growing up in the spotlight, but Brown seems to be handling it extremely well, and her style does not go unnoticed. Seriously, you need to see Brown's dress, because as many have already pointed out, on a scale of one to ten, Millie Bobby Brown is an eleven, hands down, no questions asked.

Brown is beloved for more than just her style and elegance, though. Earlier this year, at the height of her Stranger Things fame, Brown decided to take a little breather from all of the events that she was attending. And honestly, good for her.

But clearly, Brown is well-rested tonight and owning that red carpet. Not only is her dress classic and beautiful, but her shoe game is on point. Seriously, peep those babies! Gorgeous.

Many online were also praising Brown for being able to be stylish, and appropriate. Of course, young women should be able to wear whatever the heck they want to, but it is nice to see Brown taking a classy approach to red carpet dressing. She's only 13, and basically still just a kid. Hopefully, she'll be able to maintain that childlike disposition for more years to come, because it only makes her even more endearing.

Brown's dress may be Calvin Klein, but her overall look seems just so effortless that it's hard not to love her even more. Brown, who is nominated at the 2017 Emmys for Outstanding Supporting Actress in a Drama Series for her role in Stranger Things, is no stranger to award shows. Earlier this year, Brown accepted the award for Best Actor in a Show at the MTV Movie & TV Awards, and her speech made everyone fall in love with her all over again.

Honestly, it kind of seems like Brown is an actual foreign creature sent down to this earth to bless us all with her presence. She is mega-talented, kind, hardworking, and an actual age-appropriate role model for kids everywhere. Stranger Things may not be coming back until next month, but it seems like the internet is pretty satiated for now, just seeing Brown look like an actual princess.

For real though, Millie Bobby Brown could show up wearing a paper sack and she would still look flawless.

Of course, Brown should be recognized first and foremost for her many successes in her career, not just what she wears. It sometimes seems that any woman who succeeds at anything will always be valued for her exterior first, and Brown has so much interior to celebrate.

So, while it's definitely fun to fawn over the outfits and dresses and shoes that celebrities get to wear that us mere mortals could only ever dream of wearing, it's also important to remember that celebrities are more than just pretty people. Brown is only 13, but she's already proven the multitude of ways in which she is an eleven. Her style is just one of those.