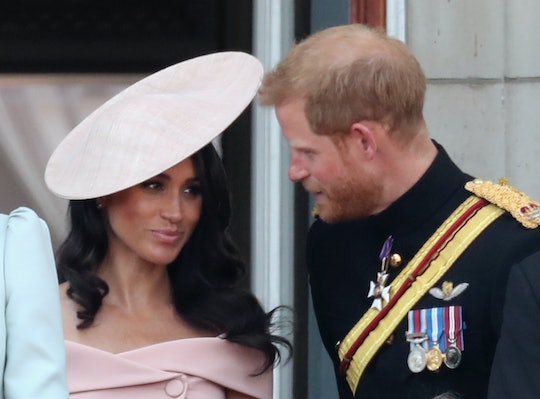 People Think Prince Harry Told Meghan Markle When To Curtsy, Proving He's Always Got Her Back

As if they weren't already the world's most adorable couple, people think that the Duke of Sussex Prince Harry told Duchess Meghan Markle when to curtsy at the Trooping the Colour parade to celebrate the Queen's birthday, and it's almost too cute to handle. Because if I'm being honest, royal duties and etiquette sounds way complicated.

Although the Queen's actual birthday is in April, her parade is always in June and it's a huge affair. It's a very formal event in which Prince Harry and Prince William have to wear their military uniforms and the whole family gathers on the balcony of Buckingham Palace. But the moment people are talking about though is right when the Queen appears. Duchess of Cambridge Kate Middleton, who was standing a little in front of Markle, was the first to curtsy, as is custom. Meghan curtsied just after her, and it appears that Harry might have given her the cue by saying "now." Or she just saw Kate do it and followed right after her.

A lipreader was watching the whole time and saw it all go down, according to The Mirror. Even before the curtsy, Meghan was reportedly very nervous throughout the event. The lipreader also saw Harry ask Meghan if she was "OK" throughout the whole thing and reassure her. Now, we obviously don't know exactly what was said on the balcony, but he does appear to have given her some help throughout this first, very major public appearance.

He Says *Something* At Least

Twitter Is Convinced He Gave Her A Head's Up

Meghan's wedding was arguably the biggest event of the year and all eyes have been on her ever since. But public appearances like this one have to be rough for a new member of the royal family. There's a lot of protocol and rules to follow. Some trolls on social media are making fun of her for having to be "told" when to do things by her husband. But it's not a sign that she's inept or incapable. That's totally ridiculous. If anything, it was nice to see that Harry had her back, because if she didn't curtsy or had done something even remotely "off," people would have flipped, too. As a woman in the public eye, she sort of can't win.

People have been tracking Markle's curtsy-ing skills since she and Harry first went public with their relationship. According to Harper's Bazaar, the first time she ever greeted the Queen in public was back in November. During Markle's wedding, spectators went wild when it appeared that she didn't curtsy when she saw her mother-in-law.

She and Harry were both supposed to curtsy and bow just after the national anthem in the ceremony, but many people didn't spot it. Luckily, it was all about camera angles — viewing the moment from a different perspective proved that Markle did in fact show her respect. The curtsy is a huge deal. The Telegraph reported that she will always have to curtsy to any royal ranked higher than her, such as Prince Philip, Prince Charles, and even Prince William and Duchess Kate.

Meghan and Kate also have to take a knee whenever they encounter "blood princesses" or women who were born into the royal family and didn't marry into it, such as themselves. That list includes Princess Anne, Princess Eugenie, and Princess Beatrice, although they only have to do it when they're not with their husbands. According to The Telegraph, Meghan and Kate have to do this in public or private, which means that Meghan has had a ton of practice for the big balcony moment.

So, maybe Harry didn't actually tell her when to curtsy, because she already knew. But it is cute to think that he wanted to make sure she didn't offend anyone's sensibilities, as arcane as they might seem.