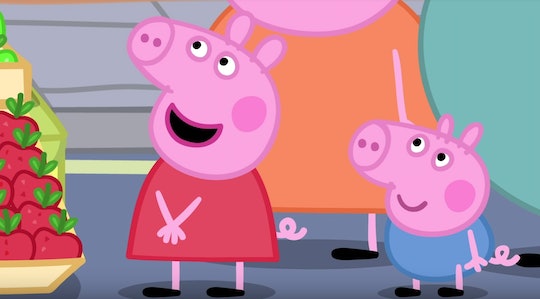 Kids' shows in recent years have come a long way since I was a child growing up in the 90s, and in a good way. These days, you can expect to find characters of all shapes, sizes, races, ages, abilities, and backgrounds on TV. And their differences aren't necessarily the focal point of the characters, either; they simply exist, as they do in the real world. Despite this growing trend of inclusion when it comes to children's TV shows, many would argue that there's still room for even more growth. For example, people want Peppa Pig to create a same-sex parent family, starting a petition that already has over 17,500 signatures.

I'm willing to bet most parents these days have at least heard of Peppa Pig. And the vast majority of us can sing that little jingle in our sleep. The show centers on a preschool-aged piggy, Peppa Pig (*snort*), her little brother George (*snort, snort*), Mummy Pig (*SNORT*), and Daddy Pig (SNORRRT!!).

Since the beloved children's show is based out of the United Kingdom, Peppa and her friends have British accents. (Thus, the reason your 3-year-old is speaking with an accent and pronouncing words like "zebra" like zeh-bra and "tomato" like toe-mah-toe.) With simplistic drawings and storylines that follow Peppa during her everyday adventures, even I have to admit the show is mesmerizing to watch.

Here's the thing, though: There aren't any same-sex parents on Peppa Pig. And viewers want to change that. So much so, in fact, that a Care 2 petition started in April now has more than 17,500 signatures.

"Peppa Pig is one of the most popular TV shows for young children and has won numerous British Academy Children's Awards. The show features Peppa Pig and her family, and various families of other animals they are friends with," the petition reads. "However, despite there being six series and over 250 episodes produced so far, none of the families feature same-sex parents."

A spokesperson for Entertainment One — the production company behind Peppa Pig — told Romper in a statement that they "receive lots of feedback from viewers about the show and will take this suggestion on board for future episodes." The statement added that the production company is "keen to have a wide a range of characters as possible that all children can relate to."

It's worth noting the petition has experienced a surge in signatures as a result of the recent Arthur episode that included a same-sex marriage. (Arthur's teacher, Mr. Ratburn, marries a man in the premiere of Season 22.) And the Care 2 petition makes sure to make mention of this, as well as the educational benefits of having same-sex couples on children's shows.

“Children watching Peppa Pig are at an impressionable age, and excluding same-sex families will teach them that only families with either a single parent or two parents of different sexes are normal,” Care2's Rebecca G said in a news release. “Peppa Pig is not just for entertainment, children are inevitably learning from it too. It's time this beloved children's show uses its platform to introduce a same-sex parent family, teaching its young viewers about equality and that love comes in all forms.”

The way I see it, plenty of kids' shows are way overdue for some LBGTQ+ representation. Because there are all types of people and relationships in this world, after all. So it would be a great learning opportunity for kids who might not personally know a same-sex couple. (And no, it's not "sexualizing" children; same-sex couples exist, the end.)

What it comes down to is this: Seeing a squirrel with two dads or a panda with two moms on Peppa Pig would probably mean a lot to children with same-sex parents to see their type of family represented on the show.

Editor's Note: This article has been updated to include a statement from Entertainment One.