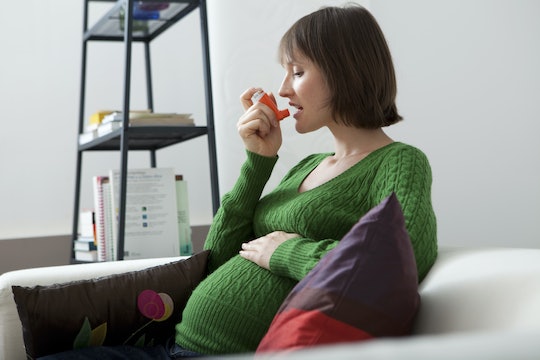 Your Asthma Could Cause A Serious Pregnancy Complication, According To New Study

As any woman who's been pregnant can tell you, there comes a point in her pregnancy where suddenly, it feels like it's getting just a little bit harder to breathe. When you're growing a tiny human inside of your body, your lungs can get a bit cramped, and suddenly that walk up your stairs leaves you a lot more winded than before. For pregnant women with asthma, the shortness of breath can feel especially frightening. According to a new study, however, women with asthma are more at risk for preeclampsia — a serious pregnancy complication that goes way beyond just being able to catch one's breath.

The Swedish study also found that women with asthma were also more likely to have shorter pregnancies, which could certainly account for the increased risk of low birth weight, as the two conditions are related. While other studies have merely established a link between asthma and preeclampsia, the Swedish study appears to point to direct causality. "It seems to be the asthma per se that causes these complications," Rejnö said in a press release.

In the United States, approximately 1 in 12 adults have asthma, according to the American Academy of Allergy, Asthma and Immunology. That number works out to a staggering one-eighth of the U.S. adult population, or 25 million people. More concerning is that the number of people with asthma has been on the rise, with asthma prevalence up from 1 in 14 adults in 2001. The American College of Allergy, Asthma & Immunology estimates that asthma affects 8 percent of women of childbearing age. So what does this mean for pregnant women who may already have asthma, or develop asthma during their pregnancies?

"This means that well-controlled asthma during pregnancy could reduce the relative incidence of complications during pregnancy and childbirth," Rejnö concluded. The study's conclusions only bolster treatment recommendations for pregnant women with asthma.

The ACAAI recommends that pregnant women who have asthma continue to actively monitor, manage, and treat their symptoms throughout their pregnancy. If you're already using an inhaler, talk with your health care provider about which inhalers will be best to use during your pregnancy. That said, the ACAAI notes that most asthma medications appear to be safe. Asthmatic women are advised to continue taking any and all asthma medication unless a doctor tells them to discontinue use.

So if you're pregnant and have asthma, don't panic: The best thing you can do is keep your doctor up to date with any abnormal symptoms during your pregnancy that could be the early stages of preeclampsia.