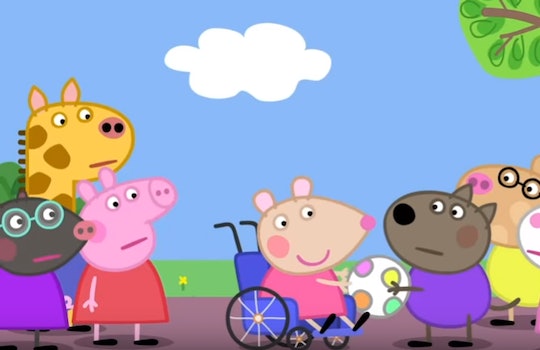 The Home Of Peppa Pig/YouTube

Who doesn't love being introduced to a great new friend? Certainly Peppa Pig seems pretty excited about it... not that her play yard friends were boring or anything, of course. It's just nice to change it up sometimes you know? Especially if that new friend happens to bring a little special certain something to the group. A lesson about the world around and the people in it, perhaps. Well that perky little pig with the infectious British accent is in luck, because Mandy Mouse, Peppa Pig's new character who uses a wheelchair, has arrived to teach children about inclusion, which should make her popular with parents as well.

At the beginning of the month, Peppa Pig fans might have noticed an adorable new character on the show — sweet little Mandy Mouse. She first became known to fans when Madame Gazelle, Peppa's hip teacher with the cosmopolitan French accent, introduced Mandy to the students. She came rolling into the room in her wheelchair and let out a little mouse-like "squeak" since she is after all a mouse and there you have it.

The various pigs, sheep, giraffe, elephants, and other animals all hanging out in the classroom were presumably instantly charmed. And about to learn something about kids with different abilities, something that will hopefully filter to the millions of kids watching at home.

Judging from some of the episodes that have included Mandy Mouse so far, it looks as though the show is going to focus on how the young mouse in the wheelchair is able to play the same games as the other children. She will simply be using her abilities differently to play those same games.

For instance, in one episode Mandy Mouse starts a game of basketball with Peppa Pig, Emily Elephant, Danny Dog, Molly Mole, and the rest of the gang. While they run along the court she whizzes past them in her wheelchair and scores not just a goal, but a simple lesson for children. A reminder not to make assumptions about a person's abilities and to include everyone who wants to be included.

The introduction of Mandy Mouse brings a new type of diversity to Peppa Pig that fans hadn't seen before. While there's a hugely diverse mix of animals on the show, all of them are able to walk. This is, of course, not the case for every human being on the planet, child or adult.

Now with Mandy Mouse' introduction as a regular character, as noted by PopSugar UK, children can get a glimpse of a different kind of life.

Or they will recognize themselves if they happen to be in a wheelchair. Several parents took to the official Peppa Pig Twitter to share stories of their own child's reaction to Mandy Mouse.

Mandy Mouse is already encouraging healthy conversations about disabilities, as Aamir Ahmed explained to Indian Express, because she helped him talk to his daughter about differently-abled people. "Our daughter said why isn’t Mandy Mouse playing like others? She can get up and walk," Ahmed shared with Indian Express. "Well, she hasn’t seen many disabled people around. And that’s a problem. Lack of visibility of disabled people in public spaces should be a concern. That lack is due to little resources as well as social acceptance for the disabled people.

The reality is that children are always looking for answers to questions, and sometimes it takes a new character on a show like Peppa Pig to help them figure out what those questions might be.

More Like This
From Captions To Gifts, These Are All The Kindergarten Graduation Ideas You Need
Anthony Anderson Thanked His Son For Inspiring Him To Finish His College Degree
You're Going To Laugh So Hard At These Graduation Memes
These Instagram Captions Capture The Comedy Of College Graduation