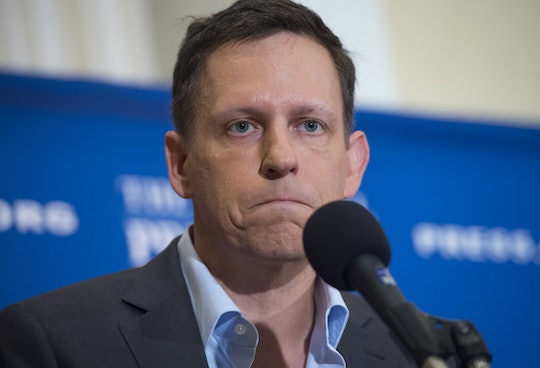 Forget all this talk of how to help Americans living below or near the poverty line. Peter Thiel knows about a group of truly disadvantaged people, and he's ready to be their champion. Yes, Peter Thiel supports "single-digit" millionaires who can't even afford the legal system. Cue the world's tiniest violin (but see if you can get a double-digit millionaire to pay the violinist, because a single-digit millionaire probably can't afford to).

On Monday, Thiel gave a speech at the National Press Club in Washington D.C. about his support of Republican presidential candidate Donald Trump. In the ensuing question and answer session, talk eventually turned to Thiel's secret financial backing of Hulk Hogan's lawsuit against Gawker Media, after the media company published parts of the wrestler/reality star's sex tape. That case's $140 million judgement put Gawker out of business.

When asked about why he helped Hogan, the billionaire venture capitalist told the crowd about his noble reasons, saying that, "If you’re a single-digit millionaire like Hulk Hogan, you have no effective access to our legal system. It costs too much." Romper reached out to Thiel for a statement, and did not immediately hear back.

Wow. In addition to perhaps being a vampire, Peter Thiel is a truly benevolent soul.

Of course a sense of charity for the less-fortunate is the reason Thiel helped out poor, destitute Hogan. It couldn't possibly have anything to do with Thiel's own, years-long personal vendetta against Gawker after the site published an article called "Peter Thiel is totally gay, people," along with other reporting on how he "ruined people's lives for no reason," which, according to The New York Times,

...drove Mr. Thiel to mount a clandestine war against Gawker. He funded a team of lawyers to find and help “victims” of the company’s coverage mount cases against Gawker.

Nope, it was all about helping a David-style famous millionaire fight against a Goliath-style corporation whose mission was truth-telling. As Hogan's lawyer, Charles Harder, told The Hollywood Reporter back in September,

[Hogan] needed help from someone because Gawker didn't bat an eyelash spending $10 million trying to beat him. The deck is stacked against plaintiffs... What Peter Thiel was able to do was level the playing field. That's all he did.

(In response, Gawker founder Nick Denton told THR for the same article that "the idea that [Thiel's] team are the underdogs is hilarious.")

So go ahead and pour one out for all those single-digit millionaires. Or actually, don't. Given their severe financial straits, they'd probably rather have you just donate the money straight to them, so they can put it in that jar they keep in their crumbling kitchen marked "Legal Defense Fund."