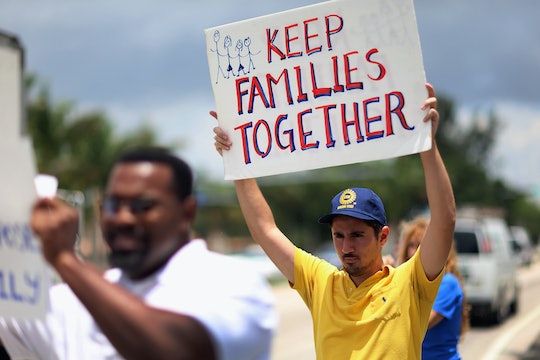 In the wake of reports regarding nightmarish conditions at migrant detention centers, immigration advocates have ramped up efforts to fight back against the Trump administration's policy of separating families and ensure migrants' basic rights. Now, a petition urging ICE to reunite a migrant mother in need of medical care with her young children is circling the web thanks to Families Belong Together, a coalition of nearly 250 organizations working to fight the separation of immigrant families.

Families Belong Together began a MoveOn.org petition demanding acting U.S. Immigration and Customs Enforcement (ICE) Director Matthew Albence to immediately release a migrant mother who they identify only as "Mariana." According to the petition, Mariana was separated from her two children — reported to be 5 and 7 years of age — in April and is now suffering "an acute medical crisis."

"Despite an independent medical expert's confirmation of her urgent need to get specialized care, ICE continues to deny her access to an OBGYN and refuses to reunite her with her children," the petition alleged. Romper has reached out to both ICE and the Department of Homeland Security (DHS) for comment, but did not receive immediate responses.

According to the petition, Mariana recently lost consciousness while in ICE custody and was informed she needed specialized care from a gynecologist. "The doctor at the ICE facility told her she is at risk of having a hysterectomy if she doesn’t receive appropriate care," the petition stated, alleging that ICE has yet to make this recommended medical care accessible to Mariana. In their petition, Families Belong Together stressed that an independent medical expert had reviewed Mariana's records and expressed "grave concern that her continued detention could impact her future fertility."

While ICE did not immediately respond to Romper's request for comment, the agency had previously told NBC News that it spends more than $269 million on "comprehensive medical care" for those it detains. In a statement to NBC News, ICE spokesperson Danielle Bennett said the agency "takes very seriously the health, safety and welfare of those in our care, including those who come into ICE custody with prior medical conditions or who have never before received appropriate medical care." It's unclear if Mariana's reported health issues were impacted by a prior condition or the result of something she developed while in ICE custody.

Earlier this month, Rep. Ayanna Pressley spoke out on behalf of Mariana during a House Hearing on Migrant Children and Border Security, saying the mother had come to the United States seeking asylum from state-sponsored gender-based violence in Angola. According to Pressley, Mariana's children were allegedly taken from her and sent to Chicago while she was placed in a detention facility operated by Corecivic in Laredo, Texas. At that hearing on July 12, Pressley attempted to ask former acting ICE director Thomas Homan how a member of Congress might work to advocate for the medical needs of person in ICE custody with little success in receiving an answer.

While Families Belong Together alleges that Mariana "wrongfully and unjustly" separated from her two young children, they noted that DHS has "attempted to justify the separation." According to the Families Belong Together petition, DHS has alleged that Mariana was a member of a guerrilla resistance group in Angola known as The Front for the Liberation of the Enclave of Cabinda (FLEC).

The National Immigration Justice Center, which is representing Mariana, has rebuked DHS' allegations as "completely false and unfounded," the petition noted. The petition went on to claim that DHS had yet to produce any evidence tying Mariana to FLEC at her immigration court hearing.

According to Families Belong Together, Mariana and her children already have a lawfully-present cousin willing and able to sponsor them upon their release in the United States. "Transfer to another facility is NOT an acceptable outcome," Families Belong Together wrote in their petition. "We demand that ICE immediately release Mariana, reunite her with her children and stop the cruel trauma that is unnecessarily being inflicted on her family each and every passing day she continues to be detained."