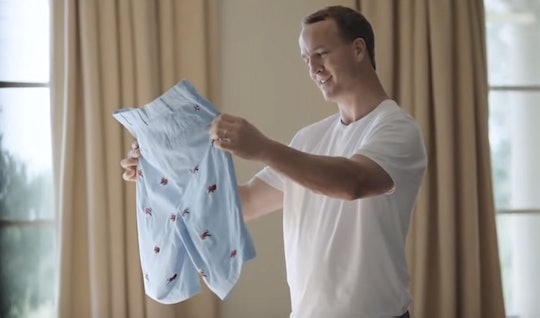 Super Bowl 50 next weekend has seriously got sports-y people hyped. (I'm not a sports-y person.) Apparently it's a big deal because Peyton Manning of the Denver Broncos will be matched up against the Carolina Panthers newbie Cam Newton, according to Forbes. So it will be like some kind of seasoned-career-player-versus-young, fresh-talent kind of tension. Watching the Super Bowl is fun for even non-sports-y people for two reasons: the commercials (duh) and the internet reactions. For example, Manning is a Nationwide member and representative and he has frequently appeared in commercials for the company. The internet has already doled out some amazing Peyton Manning Nationwide memes, and they're the perfect combination of funny, biting, and silly.

Manning's Nationwide commercials are ridiculous — there's no other way to put it. They're silly, he speaks in this monotone, uninterested voice, and he's also often singing everything to the "Nationwide is on your side" tune.

For example, in his most recent one, he holds up a pair of patterned shorts and says, in the sing-song-y voice, "Crawfish shorts, I like your style." It's absurd. Then, he's sitting in what appears to be a scary movie, and he says, "Don't open that cellar door," of course, to the Nationwide tune.

The best Peyton Manning Nationwide memes support Manning, make fun of him, allude to allegations that he used performance-enhancing drug HGH, and call him out for past losses. (Manning has denied all allegations that he used HGH. In a press conference Thursday, he even said he welcomes the NFL's investigation into the allegations, according to ESPN. "I do welcome it. It's no news to me," Manning said. "I still stand by what I said then that it's garbage from the first day that it came out, garbage today." Manning's representative, Ari Fleischer, did not immediately respond to Romper's request for comment.)

OK, this isn't Nationwide related, but why is everyone being so mean to Manning?!

The Super Bowl is sure to be exciting and the internet filled with the best jokes about it.