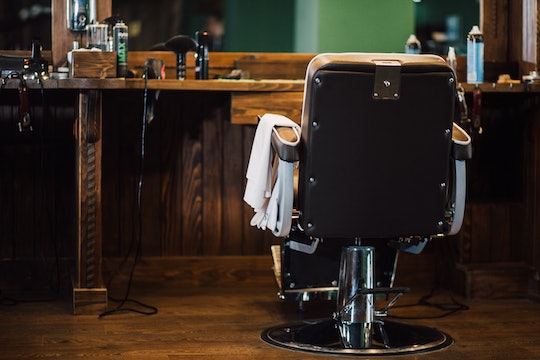 The media tends to portray breastfeeding through a very strict lens, whether it's only showing parents feeding kids in the privacy of their own homes or depicting stereotypical moms. Rarely do you see images of parents who don't fit these so-called norms (not because they don't exist, of course) and perhaps this explains why a photo of a breastfeeding mom getting a buzz cut is receiving so much attention. Not only does it challenge gender norms, but it also reinforces the idea that breastfeeding is acceptable anywhere, anytime.

It's wild to think about, but some people still believe breastfeeding should be done in private. And although it's OK to breastfeed behind closed doors (do what's right for you!), there shouldn't be limitations on where a person can breastfeed. If you want to breastfeed in a park, go for it. A restaurant? Do you your thing. Feeding your child isn't a shameful or explicit act, folks.

Someone who agrees with this sentiment is barber and owner of Adrian Fanus Grooming salon in Brooklyn, New York, Adrian Fanus, who took to Facebook on Sept. 21 to share a gorgeous shot of his client, Nicolette, breastfeeding her son while getting a buzz cut.

"Nicolette came in for a haircut and her husband sat in the lounge with their baby," he explained in the post that has been shared 147 times and has received 745 likes as of Tuesday. "He was crying a lot and I asked his mother what is wrong. She replied that he was hungry and needed to be breastfed."

Instead of telling Nicolette to feed her baby somewhere in private, Fanus did the right thing — he encouraged her to take care of her son in the chair.

"I had already completed the haircut and was about to add the lines. I assured he that it was okay to take care of her son," he continued. "She smiled and her husband laughed as he carried him into the room."

Someone took a photo of the moment, which shows Nicolette lovingly looking at her son while Fanus finishes up the cut. It's stunning not only because Nicolette's hair looks bomb, but because it promotes acceptance. There's no "right" look for a mom, and there's no "right" place to breastfeed your kid.

"This photo addresses two things that women are constantly criticized for, cutting their hair off and breastfeeding," Fanus said about his intention behind sharing the photo. "It is time that we embrace what is beautiful and natural."

In response to Fanus' post, many people left comments praising his and Nicolette's efforts.

"This is so, so amazing!!!!" one person commented. "A champion for women and breastfeeding everywhere. Thank you."

Someone else said: "Yes!! That is a powerful woman right there!"

"Sis keep it up only you are a proud mother I love it very much. I also encourage my wife to do the same thing," one person penned.

Clearly, there's a reason this photo is resonating with so many. And I think it proves there's a need for breastfeeding moms to be better represented in the media, especially concerning those who also buck gender norms.