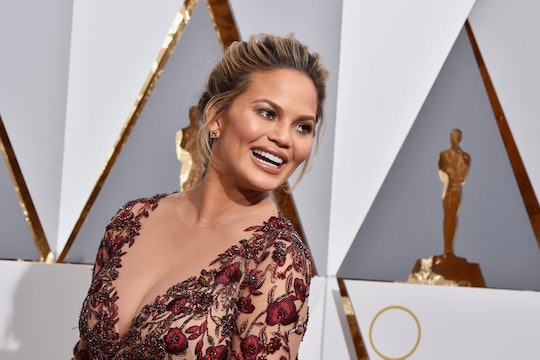 Chrissy Teigen is the master of most things, whether it's eating junk food in a classy manner or joking about her cry-face. Which is why it is no surprise that Teigen's new baby photo is the most adorable thing you've seen on Instagram since Chris Pratt posted a picture of his bespectacled son catching bass a few weeks ago. Teigen is a social media queen so it's nice to see that even though she's a sleep deprived new mother, she's still working on her crafty captions and hashtags.

Teigen and husband John Legend announced the birth of their daughter this weekend with a shot of the baby's birth-weight, writing, "She's here! Luna Simone Stephens, we are so in love with you! And sleepy. Very sleepy."

Today's picture shows Teigen, likely still pretty sleep-deprived, holding tiny Luna on the back porch of your dreams, dog included. Who needs #squadgoals when you can have #momgoals? Both mom and daughter seem equally content to bask in the sun and chill. As always, Teigen's captured some sheer bliss (it used to be of cheese fries) with the public's first view of the latest addition to their crew.

Teigen loves pleasure and her family, which is why it's nice to see that as a new mom she's kept up with being one of the most authentic voices on social media. Just think, this is a woman who looks at cheese in the same way she looks at her daughter. Welcome to adulthood, everyone. If that's not a sign of modern motherhood, who knows what is?

According to Us Weekly, the couple is, obviously, enthralled with Luna. "It’s a long time coming. They went through a lot to have this child," friend and producer Mike Jackson said. "They’re excited. We’re all really blessed to have her a part of all our lives.”

Back in March, Teigen told People that she wasn't sure she wanted to share baby pics right away. “I’m not ready for people’s comments,” Teigen said. "It’s not like I don’t want to show her or that I’m hiding," she said. Teigen added that she wasn't going to shy away from the camera once she was ready, either. "I’m not going to do sneaky back shots of her or anything," she said.

When social media is a part of your personal brand it's hard to know when you're oversharing or not. Teigen and Legend seem to be two new parents who know how to navigate that fine line between sharing and over sharing. In any case, it's nice to see that everyone is holding up just fine as far as Instagram can tell. We'll wait for the baby and nacho pics, Chrissy. Just get some sleep first.