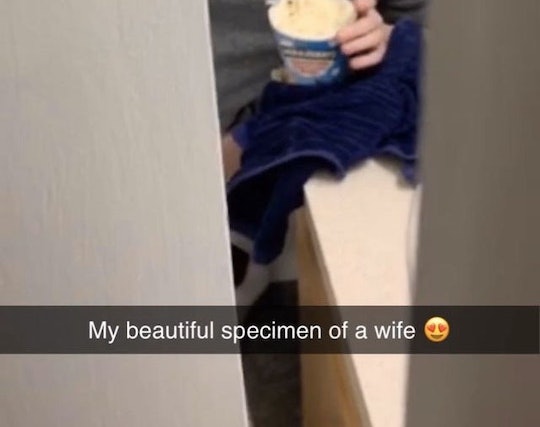 There are lots of ways people document the realities of motherhood on social media, but I have to tell you this photo of a pregnant mom hiding in the bathroom, eating ice cream should be on display in the Louvre in the "realism" category. This is the sort of photo I think women contemplating motherhood should be asked to study to see if they're going to be up to the task. Because this is what it looks like when you're in the trenches, folks.

Reddit user u/Mookattacks, whose name is Chelsea, recently posted a hilarious photo that her husband had taken of her to the sub-Reddit group Baby Bumps. The mom of two girls, who is pregnant with her third child, was caught in the act of hiding out in the bathroom digging into what looks to be a small tub of Ben and Jerry's ice cream. "My beautiful specimen of a wife," her husband wrote on the photo along with a heart eyes emoji.

"My husband found me hiding in the bathroom, pants down, shoveling cookie dough ice cream in my mouth and hiding from our kids," she captioned the photo on Reddit. "This is pregnancy."

Chelsea tells Romper that her quiet time doesn't usually start until the kids are in bed, but this particular day she just couldn't wait for some alone time. She says this was "[her] first time hiding out with food in there."

"And I just so happened to be caught with my pants down. Literally."

Moms everywhere often find themselves struggling to fit in a few moments alone when no one wants food or needs to be hugged (the feeling of being "touched out" is a thing for a reason).

Other parents took to Chelsea's Reddit post to share that they've also come up with some inventive ways to keep their food to themselves at times, like one Reddit user who wrote "my go-to is changing out my candy from its noisy packaging to a quiet sandwich bag and then eating pieces out of the bag from my hoodie pocket when my kid isn’t looking. he hasn’t caught on yet." Another Reddit user was simply happy to find she wasn't the only one, writing, "Omg I thought I was the only one. 8 months pregnant and I hide in the bathroom a lot too especially when eating. 2 kids and one is 4 so even if I get him the same thing he will want some of my food."

For the record, Chelsea isn't mad at her husband for taking the photo. On the contrary; she tells Romper that they often play these kinds of pranks on each other. "I'm sure I'll get my payback soon," she says.

Of course, hiding in the bathroom from your kids is not a new concept. It can be difficult to be constantly at someone else's beck and call, particularly when that little person doesn't understand the concept of patience just yet. Chelsea says that she has every intention of continuing to carve out time for a private snack but "from now on if [she's] trying to be more sneaky [she] will have to plan better."

"Maybe hide the ice cream in a bag of peas? That should also help deter the children if they find me," she says. It is possible, though, that her kids are learning a little from her covert snacking operation. "Although I did find my 7-year-old the other day 'sneakily' drinking syrup straight out of poor Mrs. Buttersworth instead of sweeping the kitchen," Chelsea says. "I wonder where she gets it from... "