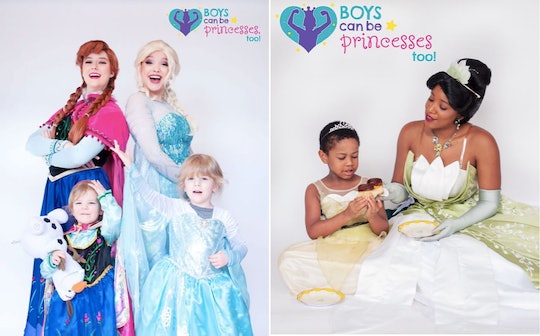 It all started with a little boy who was playing pretend. Photographer Kitty Wolf tells Romper she was working with a preschool-aged boy who was pretending to be a princess when a little girl told him he couldn't do that. She told him "princesses are for girls" and something in Wolf rose up. So she decided to capture boys playing as princesses in an empowering photo series to remind people what she realized that fateful day: "Princesses are for everyone."

Wolf is a photographer based in the Chicago area and initially owned a company called Princesscapades Princess Parties, which employed actresses dressed as Disney princesses to provide a "magical, enchanting princess party experience." While the company has since closed, Wolf says she remembers being truly inspired by one princess party in particular for "a little boy who was dressed like Elsa" from Frozen. "Meeting him and seeing that he loved meeting and pretending to be Elsa just as much as all the girls we visited really solidified in my mind that boys can and do like being princesses too!" Wolf tells Romper.

After seeing this little boy have the time of his life, she decided to start a project that would offer little boys the opportunity to dress as princesses for a photo series, which has recently gone viral on Facebook. And little did she know just how important this photo series would become to families who simply want their little boys to express themselves as openly as possible.

The photo series, called The Boys Can Be Princesses Too Project, sees young boys dressed as popular Disney princesses like Mulan, Cinderella, Ariel, Elsa, and more alongside adult versions of their own characters. And these boys didn't simply get to pose with the adult princesses; Wolf tells Romper "the adult princesses in the pictures are all professional performers and were 100% acting the part of the princess they portrayed."

"So in the boys' eyes, they got to dress up and MEET their favorite princess!" she says. "They had the times of their lives and I was so happy to be there to capture their joy and show the whole world that boys can be princesses, too."

The excitement on the boys' faces in each picture are truly infectious.

As a mom of four sons who all loved to play dress-up in both traditionally male and female gender roles, I can't tell you how much I love this photo series. How much I love the idea that parents are supportive of all kinds of creative play, regardless of gender. And of course I'm not alone; the series has been seen by more than 1.4 million people, according to Wolf. And thousands of people have also taken to the Boys Can Be Princesses Too Facebook page to heap praise on the photo series and thanking Wolf "for such a beautiful project."

This project deserves all kinds of recognition and attention. It acts as a reminder that, just as little girls should never be expected to stick to "girls toys," nor should boys. They want to be able to play dress-up too, and they need to be able to see real evidence that playing princess is a magical thing.