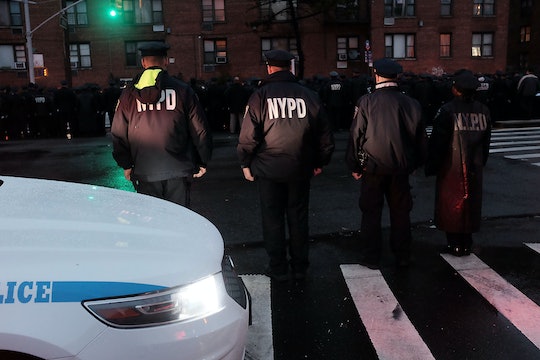 Fear and confusion spread through New York City Saturday evening as reports of an explosion made their way to TV stations on online news outlets. As eye-witness accounts came pouring in, videos and photos from the explosion in Chelsea — a neighborhood in lower Manhattan — made their way onto social media in hopes of piecing together what happened that night.

(UPDATE: According to a press conference Saturday night, the explosion in New York's Chelsea neighborhood was likely an intentional act, said James O'Neill, NYPD Commissioner. New York City Mayor Bill de Blasio, however, said there is "no evidence at this point of a terror connection," and no indication that it is connected to an earlier bomb scare in New Jersey Saturday. Officials confirm 29 injuries connected to the explosion, but no major injuries or deaths have been reported at this time.)

According to ABC News, the FDNY confirmed an explosion occurred on 23rd Street and Sixth Ave. FDNY told NBC News that the explosion occurred before 8:30 p.m. ET. At the time of initial reports, it was unclear what caused the explosion. But later into the evening, The New York Post reported and confirmed that a dumpster exploded outside a residence building for the blind, blowing out the windows of the lower-level apartments.

As reporters and officials tried to make sense of the explosion — and keep citizens of the city safe — passersby and residents took to their phones to capture the chaos of the evening.

The Scene Of The Explosion

The FDNY In Action

One question on many people's mind is whether or not the Chelsea explosion is related to the Seaside Park, New Jersey bomb from earlier in the day. CNN reported that three pipe-bomb-like devices were found in a dumpster on the Seaside Park boardwalk early Saturday afternoon. No injuries were reported from the explosion, but the area was evacuated at the time.