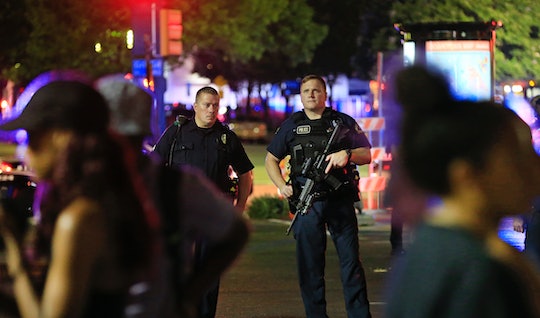 Photos From The Dallas Shooting Show Chaos And Fear, But A Reason To Hope

During a peaceful march in protest of the deaths of Alton Sterling and Philando Castille in Dallas, TX on Thursday night, where demonstrators even stopped to take pictures with members of the Dallas Police Department, shots range out from rooftops and "elevated positions." Snipers targeted law enforcement members, shooting 10 and killing 5 members of the Dallas Area Rapid Transit (DART). An 11th officer was also shot during a standoff with one of the suspects, who is now deceased. Photos from the Dallas shooting show chaos and fear, but amidst the chaos, a willingness for people to come together and help. Photos show heartbreak, but they also show a resilience that, sadly, has become somewhat of a necessity as this country has grown accustomed to devastating losses of life and gun violence.

What is now being called the deadliest attack against United States law enforcement since September 11, social media accounts, numerous personal posts and real-time video show a scene that can only be descried as something from an action film. Shots rang out in downtown Dallas, protestors and demonstrators documenting the ongoing situation through the phone as they sought safety and shelter. The photos and videos are chilling, some even showing a gunman taking aim at a police officer.

Three suspects are in custody as the names of the fallen officers are being released. The first officer shot and killed in the line of duty has been identified as Brent Thompson, 43, who was a police officer for 7 years and recently married a fellow officer no more than two weeks ago.

As the law enforcement community, the Dallas, TX community and the country come together to mourn, grieve and come to terms with another loss of life, photos are being circulated to show that while the situation was terrifying and horrific, there were people helping. In the middle of the hate and the violence, there was love and an immense amount of respect for human life and a connection that linked everyone involved, and those pictures are what many are choosing to hold onto, now.

Dallas Police Chief David Brown made a statement Friday morning, saying, "We're hurting. Our profession is hurting... We are heartbroken." He also reminded members of the media that the situation was an ongoing investigation, going on to say, "All I know is that this must stop, this divisiveness between our police and our citizens."

The investigation is on-going and more details are emerging as local and national communities attempt to come to terms with this latest loss of life and senseless act of gun violence. While many of the videos and photos show chaotic scenes that can fill anyone with fear and even anger, there are so many that show the good in humanity. There are so many images that show the compassion, and those images will continue to get so many people through the days, weeks and months ahead.