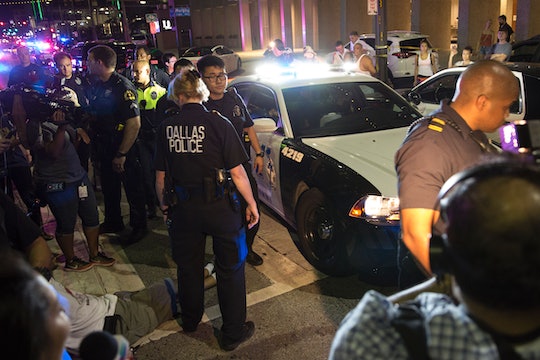 During a peaceful march in protest of the deaths of Alton Sterling and Philando Castille in Dallas, TX, snipers perched from high vantage points specifically targeted members of the Dallas Police Department, shooting 10 and killing 5. Another, 11th police officer was also shot, during an exchange of heavy gunfire with one of the suspects. As more information is released, police officers, the community of Dallas and the country come together to mourn what has now become the deadliest attack on United States law enforcement since September 11.

According to the National Law Enforcement Officers Memorial Fund, the strategic shooting against members of the Dallas Police Department that ended with the death of 5 police officers was the deadliest incident for police since 9/11, when 71 officers were killed when the two Trade Center buildings were attacked and, later, collapsed. Authorities have released the name of the first police officer to have been killed, Brent Thompson, 43, who was on the force for 7 years and was recently married to a fellow police officer no more than two weeks ago. "This is very heartbreaking for us," Dallas Area Rapid Transit (DART) Chief James Spiller told NBC's Today early Friday morning. "We're making sure his family is taken care of."

President Obama has called the attack a, "vicious, calculated, despicable act," calling labeling the shooting a "tremendous tragedy" for our nation. Three suspects are in custody at this time, after one died after hours of negotiations and exchanging gunfire with law enforcement.