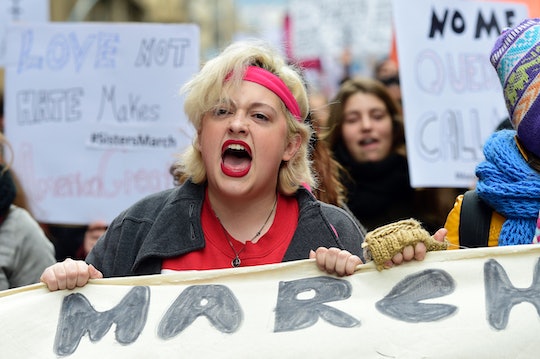 Check Out The Powerful Pics Of The Women's March

This could very well be one of the most historic marches in the history of the country. Hundreds of thousands of activists descending on the capital to peacefully protest the presidency of Donald Trump. To remind him that he is being watched, especially by those people he might not consider worth watching himself. If you need a little inspiration to remind you of the goodness and strength that still lives in this world, check out these photos from the Women's March on Washington.

President Donald Trump was officially sworn in on Friday. After what was arguably the most combative, divisive campaigns in living memory, his first order of business the day after the inauguration was to sign an order freezing new regulations for the Affordable Care Act, the most comprehensive piece of legislation to make sure every American has access to health care ever. And as he sat behind his new gold curtains in the Oval Office, taking the first steps to dismantle a program that has helped millions of people, outside a storm was brewing. A storm he will not be able to ignore. An organized group of unified humans who came together with the same idea;

We will not rest until women have parity and equity at all levels of leadership in society.

The march, which was initially started by a Facebook page in the hours after President Trump was elected, in a mystifying win against former Secretary of State Hillary Clinton, began at 10 a.m. on Saturday. But the Women's March began much earlier.

It started with social media, the great equalizer of the modern day (depending on your perspective, I suppose). It started with women and people who support women and any other marginalized group in society sharing their stories of why they marched. People who were angry or disillusioned or just ready to make sure their voices were heard.

Women all over the world took Saturday to devote themselves to marching. That is no small thing for a woman. Most of us live our lives devoted to a constant checklist, a never-ending stream of Things We Need To Do. On Saturday, there was only one thing women needed to do. They needed to march. To be there to hear feminist icon Gloria Steinem.

To congregate with women they might not agree with, women they've never met, women they don't even necessarily have to like, and march together for a common purpose.

In the spirit of democracy and honoring the champions of human rights, dignity, and justice who have come before us, we join in diversity to show our presence in numbers too great to ignore. The Women’s March on Washington will send a bold message to our new administration on their first day in office, and to the world that women’s rights are human rights. We stand together, recognizing that defending the most marginalized among us is defending all of us.