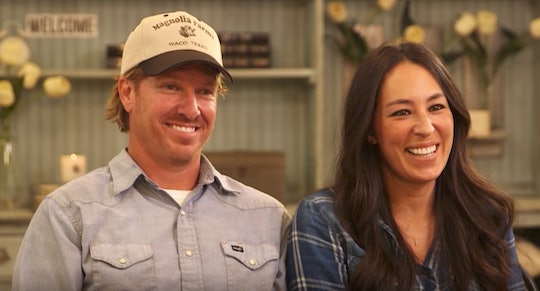 Fixer Upper stars Chip and Joanna Gaines are bonafide miracle workers when it comes to flipping houses. Throughout the past decade, the Gaineses have remodeled countless homes in their hometown of Waco, Texas, and tourism to the area has skyrocketed as a result, according to the Zillow Home Value Index. Given all of the Gaineses' success beautifying houses, it's only natural that fans would want to see photos of Chip and Joanna Gaines' house, a renovated farmhouse dating back to 1895. Obviously the photos are gorgeous, and they might inspire DIY-ers to buy a farmhouse of their own (because the pics are just that great).

Thanks to websites like Pinterest, the rustic chic decor has become exceptionally popular and sought after. Unfortunately for people with limited time, money, energy, and patience, the rustic chic look isn't always so easy to achieve. It takes a lot of work to make new stuff look old, right?

Well, it turns out Chip and Joanna are exactly the kinds of people who are capable of turning a lofty Pinterest goal into a reality. In 2012, the Gaineses achieved their most impressive real estate feat when they bought and then successfully renovated a centuries-old farmhouse in the span of a year and a half. Did I mention that the home was dilapidated when they purchased it? Yep, the Gaineses can achieve just about anything.

According to Magnolia Market, the farmhouse only had two bedrooms at the time of purchase. Chip and Joanna have four kids together, so the limited space was a problem they needed to solve. To make the house bigger, the Gaineses "turned the unfinished attic into a guest bedroom, bathroom, multipurpose room, and crafts room, and added a first-floor master suite," according to HGTV. Are you impressed yet?

To top it all off, Joanna used her amazing interior design skills to transform the old farmhouse into a rustic chic paradise. The best part is Joanna incorporated a lot of the home's original fixtures to preserve its rich history. As for the paint colors, Joanna chose "whites and soft neutral tones in the farmhouse so that it would be a calm place for the family when life gets full," according to Magnolia Market. Sounds soothing.

Now that you're all caught up on the farmhouse, check out these pictures of Joanna and Chip's masterpiece:

You don't have to be an expert at flipping houses to know that the Gaineses remolded the farmhouse like total pros. It's modern yet rustic, and its bright colors are welcoming without being overbearing. That being said, flipping an old farmhouse is a big task for people with zero remodeling skills. For most fans, Pinterest (and these beautiful photos) will have to do for now.